Posted by henryfool on Monday, 15 October 2012 in Biofuels

Will algae ever power our cars? 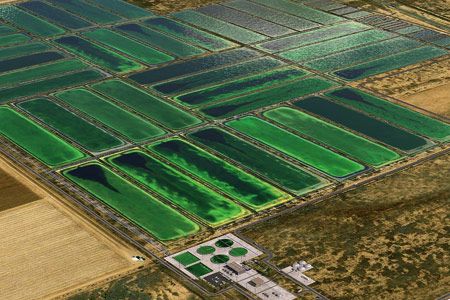 Tiny Columbus, New Mexico (population, 1,678) is hot, flat and uncrowded — an ideal place to launch a new green revolution in agriculture. That, in essence, is what a well-funded startup company called Sapphire Energy wants to do: It is turning a 300-acre expanse of desert scrub into the world's largest algae farm designed to produce crude oil. Sapphire began making oil there in May, and its goal is to produce about 100 barrels a day, or 1.5 million gallons a year, of oil, once construction of the "green crude farm" is completed next year.

"We take algae, CO2, water and sunlight, and then we refine it," says Cynthia Warner, the chief executive of Sapphire, who joined the company after working for more than 20 years at oil-company giants Amoco and BP. Algae, she says, has the potential to change the world, by reducing carbon dioxide emissions and enabling almost any country to make its own oil. "This technology is so compelling — and it will make such a big difference — that, once it gets out of the gate, it will ramp up very quickly," Warner says.

Sapphire is one of scores of companies worldwide that today are making biofuels from microalgae, albeit on a small scale, according to the Algae Biomass Organization, a trade group. Solazyme, which is arguably the industry leader, last year sold an algae-derived jet fuel to United Airlines, which used it to fly a Boeing 737-800 from Houston to Chicago — the first time a commercial jet flew using a biofuel made using algae. Synthetic Genomics, a company founded by geneticist J. Craig Venter and financed by ExxonMobil, is building an algae farm in the Imperial Valley of southern California. Other algae farms are under development in Hawaii, by Phycal, and in Karratha, Australia, by Aurora Algae, and in Florida, by Algenol. In Europe, the Swedish energy company Vattenfall and Italy's Enel Group have been using algae, which is then made into fuel or food, to absorb greenhouse gas emissions from power plants, and Algae-Tec, an Australia-based company, has agreed to operate an algae-based biofuel plant in Europe to supply Lufthansa with jet fuel.