Posted by ep-admin on Saturday, 02 October 2010 in Transportation

The car of the future is here

Jaguar has unveiled a new supercar that has much in common with a jet plane. 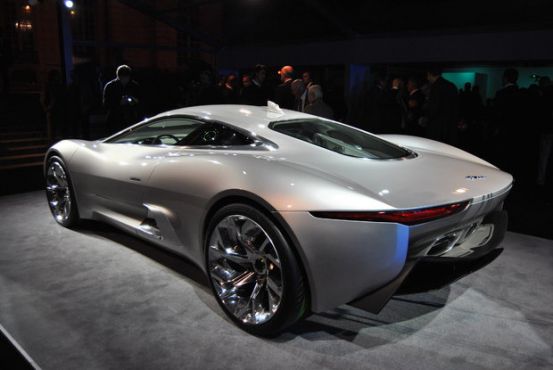 It'll accelerate quicker than a Lamborghini LP640, has a greater top speed than a Ferrari 458 Italia, and spews out fewer emissions than a Toyota Prius. Behold, friends, the holy grail of motoring: the Jaguar C-X75.

The car is a range-extended electric vehicle. In other words, it's powered primarily by electric motors and a battery pack, but it's given extra range (and performance) by an external power source that, in this case, is rather unusual.

At each wheel, Jaguar's installed an electric motor, each of which delivers 145kW (195bhp) of power. These are driven by a floor-mounted lithium-ion battery pack that can drive the vehicle for 68 miles on ordinary electric power alone. When it runs out of juice, it can be topped up via a standard household mains outlet or be given a boost via two 70kW (94bhp) micro gas turbines.

These gas turbines get their power from a flow of combustion gas -- diesel, biofuels, compressed natural gas, or liquified petroleum gas (the C-X75 has a 60-litre tank that accommodates all four). This fuel is mixed with air and ignited to charge the car's batteries to extend its range, but can also be used to power the electric motors directly in order to boost performance -- a lot.

With the batteries and turbines working in tandem, Jaguar believes the car will do 0-60mph in 3.4 seconds and hit a top speed of 205mph. Apparently, it'll even accelerate from 50-90mph in just 2.3 seconds and do a quarter-mile sprint in just 10.3 seconds, so there's a strong chance it'll be quicker than almost anything.

We haven't heard the car running at full pelt (Jaguar demonstrated it running on electric power only on a very short runway), but we've a theory the final model will sound like a full-on jet plane. Have a listen to this home-made gas-turbine van to see exactly what we mean.

When you're being sensible with the accelerator pedal, it'll return a maximum range of 560 miles, while spewing a mere 28g/km of CO2, which is pretty spectacular.