Posted by ep-admin on Sunday, 14 February 2010 in Human Health 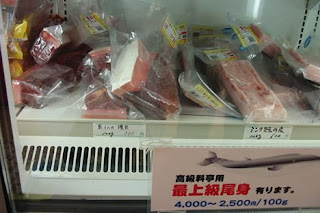 Friday 22nd January, 06:40 AM JST, TOKYO — Levels of mercury in hair samples of residents of Taiji, Wakayama Prefecture, which is known for customarily eating small whales caught by coastal whaling, are about 10 times the average in Japan, possibly due to consumption of whale meat with high concentration of mercury, one of researchers who conducted the survey said Thursday.

Hair samples were collected from 30 men and 20 women living in the whaling town with a population of about 3,400 through local collaborators between December 2007 and July 2008 for testing, Tetsuya Endo, an associate professor at Health Sciences University of Hokkaido, said.

The survey showed the average total mercury levels in the men’s and women’s hair samples were 21.6 parts per million and 11.9 ppm, respectively, while the levels of average Japanese men and women are 2.55 ppm and 1.43 ppm, he said. The highest concentration level discovered in the survey was 67.2 ppm in a male aged in his 50s, as a total of three people exceeded the level of 50 ppm for no observed adverse effect set by the World Health Organization, Endo said.

Endo expressed alarm that contamination levels among some of the residents appeared to be high enough to develop health problems according to oversea standards.

"It’s necessary to conduct more detailed research on their health conditions and the current status of contamination," he said. "We should also make efforts to curb consumption of whale meat which is highly contaminated with mercury."

The researchers, also including Koichi Haraguchi at Daiichi College of Pharmaceutical Sciences in Fukuoka, will publish the survey result in an international science magazine on oceanic pollution.

According to Endo, the researchers also discovered high levels of mercury in products made from local marine mammals and fishes, such as pilot whales, dolphins, tunas and skipjack, distributed in and around the community.

In particular, the total contamination levels in the red meat from 22 samples of pilot whales, a cetacean commonly consumed in the town, averaged 9.6 ppm, with the level for methyl mercury alone coming to 5.9 ppm, both well beyond the tentative national regulation figures of 0.4 ppm and 0.3 ppm, respectively. Among the 50 residents tested, the average total mercury level in those who eat pilot whale once a month or more was 24.6 ppm, while the levels in those who eat it only once every several months or not at all were 15.5 ppm and 4.3 ppm, respectively.

No epidemiologic survey has been conducted in Taiji although health hazards to the residents from the consumption of whale products are suspected, according to Endo.