Posted by britt on Wednesday, 05 December 2012 in Wildlife Conservation

The world's population of mountain gorillas has increased to 880 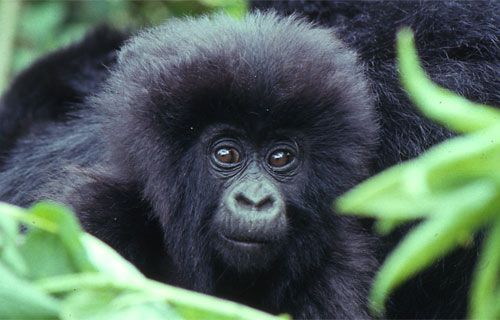 The world's population of mountain gorillas has increased to 880, up by at least 100 since 2006, according to the Wildlife Conservation Society.

Clearly these great apes are still at risk, but the increase give conservationists a reason to celebrate.

"The latest census of mountain gorillas in Bwindi (Uganda) provides the conservation community with much needed good news," Liz Macfie, Gorilla Coordinator for the WCS, was quoted as saying in a press release. "The results also show us that enforcement efforts by the Uganda Wildlife Authority there are paying off."

"We commend the census organizers for a well-organized field effort," James Deutsch, WCS's Executive Director for Africa Programs, added. "WCS is proud to be part of what has become the gold standard of effective conservation teamwork in the effort to save our closest of kin."

"Bwindi" refers to Bwindi Impenetrable National Park. The new census reveals that the minimum number of mountain gorillas there is 400. In 2006, just 302 mountain gorillas were counted. The 880 figure comes from adding the Bwindi amount to the 480 gorillas estimated to inhabit the Virunga Volcanoes to the south -- the only other location where mountain gorillas exist.

While some of the increase is due to improved census methods, it's also a reflection of continued collaboration between the Uganda Wildlife Authority with the Institut Congolais pour la Conservation de la Nature (ICCN) in the Democratic Republic of Congo and the Rwanda Development Board (RDB).

The Virunga Mountains lie on the borders of three countries, requiring the participation of agencies from Uganda, Democratic Republic of Congo, and Rwanda for effective monitoring and enforcement.

The bad news is that the mountain gorillas of Bwindi and the Virungas are the only gorilla populations known to be increasing. All other populations are thought to be in decline due to hunting and habitat loss.

Large mammals like gorillas are keystone predators, meaning that they can serve as a barometer for the rest of the ecosystem. If their numbers drop, the effect can ripple forever downward, leading to multiple problems affecting numerous other species.

For this reason, and because we humans are great apes too -- we've always paid special attention to gorillas. For example, early 20th century concern about the fate of mountain gorillas inspired the establishment of Africa's first national park -- now Virunga National Park. That happened in 1925.

The Virunga Volcano gorillas were made famous by the late Dian Fossey's long-term gorilla study in the 1970s and 80s, a period during which the gorilla population declined dramatically as a result of poaching and habitat loss. Thankfully the news is better this time around.