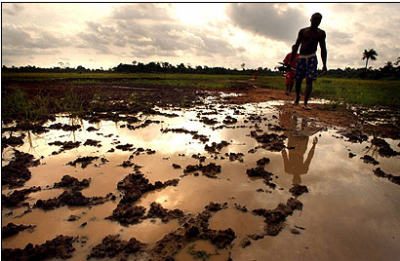 , coating waters used by fishermen in a film of sludge.

A Reuters reporter visiting several parts of Akwa Ibom state saw a rainbow-tinted oil slick stretching for 20 miles from a pipeline that Exxon had shut down because of a leak a week ago. Locals scooped it into jerry cans.

Mark Ward, the managing director of ExxonMobil's local unit, said a clean up had been mobilised, and he apologised to affected communities for the spill. Exxon said it had shut a pipeline off the coast of Akwa Ibom state after an oil leak whose cause was unknown.

'This is the worst spill in this community since Exxon started its operations in the area,' said Edet Asuquo, 40, a fisherman in the Mkpanak community, as women scooped oil into buckets. In some marshy areas, plants were poking out of the slick, not yet dead and blackened by the oil.

'The fishermen cannot fish any longer and have no alternative means of survival,' Asuquo said. The US major's outage comes on top of multiple production problems in Africa's biggest crude exporter, after fellow oil majors Shell and Eni reported disruptions at onshore sites due to oil theft and Nigeria's worst flooding in 50 years.

'Mobil Producing Nigeria (MPN) regrets this incident. Our teams are being mobilised to clean up the area,' Ward said in a statement emailed to Reuters. 'We apologise for the inconveniences that it has caused.'

One fisherman described noticing a large quantity of oil on the surface of the sea and all over the beachg that the company has since sprayed chemicals in the water, which was helping to disperse it. It was the second major oil spill near Exxon facilities in three months. At the end of August, an oil spill left a slick running for miles along the coast.

Oil spills are common in Nigeria, where enforcement of environmental regulations is lax and armed gangs frequently damage pipelines to steal crude. Oil majors say thieves are responsible for most of the spills on shore.

A UN report in August last year criticised the government and multinational oil firms for 50 years of oil pollution that has devastated the Ogoniland region. 'Our prayers are for tough punishment on the oil companies operating the Niger Delta,' said Inyang Ekong, the secretary of the fishermen's association, as the car he was in swept past oil washing up onto beaches in an area called Ibeno.