Posted by indiantrail on Saturday, 01 June 2013 in Green Design 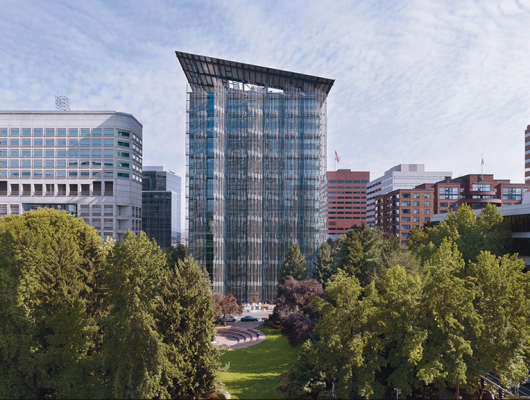 “I love the building. I've loved it since I first learned about it in November,” said Dorothy Robyn, Commissioner of the U.S. General Services Administration’s Public Building Service.

She said the refurbished building stands out across the country.

“We manage hundreds of buildings. This will be an icon,” she said.

But its price tag, reaching at least $139 million, has others, including conservative talk show host Lars Larson furious.

“I hate that building over there and I'll tell you why. In every city in America, the fanciest building built on the most expensive ground is a government building,” Larson said.

He argues the government could have built a brand-new building three times the size for the same amount.

“The way they spent that money, out of stimulus money which is borrowed, federal money, more debt for American citizens for decades to come. They ought to be ashamed of themselves,” said Larson.

Government managers said that is simply not true, and they point to the green design, including water heated by solar panels on the roof and rain water collected to flush toilets. It also has radiant heat in the ceiling and huge structures on the west to create shade.

And in this day and age,there is something else they had to take into account for the design--security from attacks.

GSA property manager Jim Silk said one precaution is keeping the public from parking next to the building.

People who stopped at random on the sidewalk outside the building mostly liked it.

“I think it’s fabulous. It's progressive and that's what it should be in Portland,” said retired architect Donald Clement.

Others thought the huge wings with aluminum poles on the outside of the building looked, well, weird.