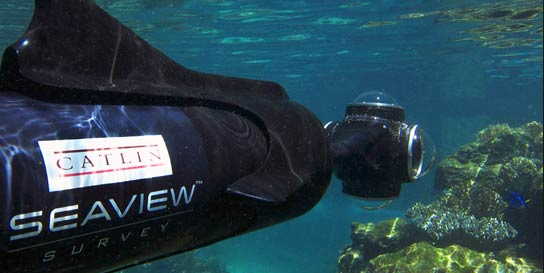 The program director said the effort would help scientists analyze ecosystems and alert the international community about its preservation.

However, the novelty is also considered a publicity stunt to give Google the advantage over the competition. The company’s mapping service has been abandoned by his partners in phones and tablets.

Google Street View images had soil submarine computer generated, but it is the first time that displays underwater photos.

‘We want to be a source of comprehensive images that allows anyone to explore everywhere, “said the BBC Jenifer Foulkes, director of the section of the oceans Street View.

‘This is just the next step to take users under the water, offering the experience of an area that many people have visited – seeing sea turtles, rays, urchins sea and beautiful fish.’

Among the sites added to the service, are the Great Barrier Reef in Australia, the Coral Bay Hanauma and Molokini Crater and Apo islands, the Philippines.

Previous studies say that pollution, overfishing and climate change have already caused serious damage to many of these colonies of marine life that were formed over thousands of years.

To analyze the new material, researchers at the Institute for Global Change, University of Queensland, Australia, are using an image recognition software to identify the creatures recorded in photographs and 3D modeling programs to monitor how habitats change over time.

The release also gives Google a new opportunity to promote their mapping services when their rivals are gaining ground.

The online store Amazon recently closed a deal with Nokia to use mapping technology of the Finnish company in its Kindle Fire tablets. The measure was considered a coup because the Kindle Fire tablets use Google’s operating system, Android.

Nokia’s technology will also be used by Microsoft in its Windows Phone system 8. And Apple has waived the service of Google Maps in your application in the newest version of the iOS operating system for iPhone and iPad.

‘We think it would have been better if we kept them ours, but what could we do? Forcing them to think differently? The decision is theirs, “said the CEO of Google, Eric Schmidt, in Tokyo earlier this week.

Google engineers gave technical support to the project, but photographs and collage of images were made by scientists funded by the Catlin Group, an international insurance company based in Bermuda.

For this, they developed a camera with three wide-angle lenses, made to take high resolution photos in low light environments.

The machine took a picture of 24 megapixels each of the lenses once every four seconds to be able to create 360 degree views. The equipment was operated by divers and moved around 3 km / h.

According to Richard Vevers, project director, the record of coral reefs was something was missing and that is very necessary. We simply have no historical records to monitor changes on a broader scale. ‘

“Scientists around the world can now study the reefs remotely and see very clearly how they are changing. ‘ 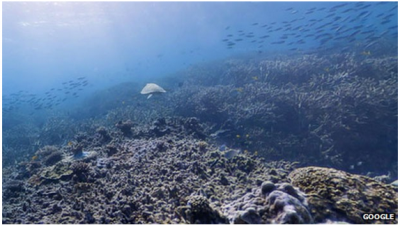