Posted by amandaevans on Wednesday, 03 July 2013 in Beauty and Fashion

One bitter irony of the sustainability movement, across all fields, is that prices tend to be anything but sustainable. Whether it is organic food or shampoo with cruelty-free ingredients or fashion without a footprint, prices are often ridiculous enough to justify the blue-collar suspicion and ridicule.

Sustainable fashion is no exception. But SlowFashioned.com, a blog about the Slow Fashion movement, discusses the “hidden cost of clothes.”

From environmental and human standpoints, the process from raw material to garment creates most of that cost. A study by British firm WRAP, found that the annual clothing footprint of a household is over 1,000 bathtubs of water, the weight equivalent of 100 pairs of jeans, and the carbon emissions of driving a car for 6,000 miles.

And those who follow international news know that the “cost” of many manufacturers’ clothes now includes the lives of over eleven hundred factory workers who died in April’s well-publicized Rana Plaza collapse, as well as the hundreds who died in less-known disasters like the Dhaka fire precisely five months before, not to mention other poor working conditions and child labor to add to disproportionate waste production.

Whether or not this designer or that bought from the factories in Rana Plaza, the collapse is one in a slew of tragedies allowed by an industry intentionally left unregulated. In response to growing consumer awareness and pressure international retailers and designers like H&M and Primark have begun signing safety agreements and pledging money to insure that inspections get done in Bangladeshi factories.

And from an environmental perspective, while designers like H&M & Nike pledge to reduce their carbon footprint or make coats out of recycled bottles, smaller local designers are basing their entire design and corporate structures on being less toxic.

For Ahava Zarembski, an Israeli-Philly designer who is opening her sustainable fashion line, Transformations, in three weeks, clothing is all about self-expression. “I was in a really serious depression,” she explains,“ and I would write poetry just to flush out what I was feeling. And when I was getting out of the depression, I used clothing as a way to first speak to the world because I wasn’t able to speak myself. I wanted to say more than what the designers were saying so I started making it myself.” 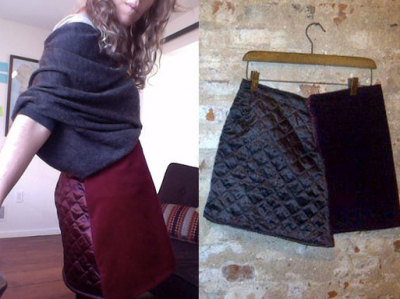 Now, partnered with a local tailor and selling skirts via Etsy she currently purchases her materials in New York, as “sustainability isn’t even in the lexicon” on Philly’s Fashion Row, she says.

There are certainly environmental boutiques in Philadelphia. SAVA, founded by Sarah Van Aken, even manufactures their own clothing lines locally, as a way of ensuring good working conditions. And though a few companies, like BLUE RED YELLOW, who grow and produce natural and organic dyes locally, have popped up. But even SAVA purchases textiles and dyes elsewhere.

And, of course, there’s no doubt that manufacturing abroad is much cheaper, Ahava points out, “and having my designs accessible and affordable is very important to me.” With her line being manufactured in limited numbers by a single tailor over the coming weeks, she has been in talks with local retailers about how to keep prices reasonable.

“I think that’s actually something that lots of people are struggling with. I come in with a sense of, what’s the price point? What would I pay for this garment? And I just started to have the conversations with local buyers of how to do that.”

The one item currently on Ahava’s Etsy account, “Deep Contrasts”—a skirt, which is corduroy on one side and quilted fabric on the other—is selling for $65. While this is more than a low-income family would spend on a skirt, it is less expensive than any non-sale item of clothing on SAVA’s website.

“The answer is community,” says Ahava. “I believe that it takes a village to make change.” This is the reasoning behind a forthcoming Sustainable Fabrics Initiative, a partnership between Ahava and Christina Roberts, the Master Printer at Philadelphia’s Fabric Workshop and Museum. The Initiative intends, among other things, to utilize urban land too high in lead to produce food or to grow organic fibers and dyes, which can be used to produce high-quality textiles. The other source of textiles, according to their press piece, will be “a network of collectors and cleaners of salvaged clothing.”

The Sustainable Fabric Initiative, if successful, could revitalize an industry that once defined Philadelphia. In 1901, 34% of Philadelphians worked in textiles, but by 2010, fewer than 2,100 did. This Initiative could serve as a model for the rest of the nation by creating jobs and producing textiles locally and sustainably.

As companies like H&M and Walmart begin a long and yet, largely, unspecific campaign to rehabilitate working conditions in Bangladesh, Ahava and her partners work to determine how to get around the problem of manufacturing at home and making prices for sustainable, ethically produced clothing realistic and accessible.

As the story of the Rana Plaza collapse indicates, the growth of either of these initiatives will depend upon the companies’ dedication to their goals, and their consumers’ levels of awareness to the broader—human, environmental and fiscal—cost of their clothing. Ahava’s “Transformations” line opens in three weeks. E-mail her via her website to pre-order, mention Art Attack, and get a 15% discount.