Posted by amandaevans on Tuesday, 16 July 2013 in Fossil Fuels 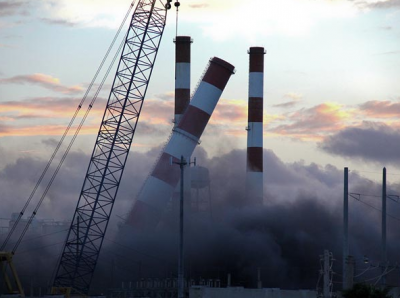 Anyone who happened to be scanning the skyline in Fort Lauderdale, Florida, at 6:45 a.m. Tuesday witnessed a startling transformation. In the space of a minute, the four towering 350-foot-high, candy cane-striped smokestacks atFlorida Power & Light's Port Everglades oil-burning power plant—a local landmark for the past half-century—abruptly imploded and crumbled into rubble.

The spectacular demolition, which was shown on live streaming video on the utility company's website, is the latest step in a $1.2 billion plan to replace the aging facility by 2016 with a new, state-of-the-art plant at the same site that will run on natural gas.

That transition, according to FPL spokesman Greg Brostowicz, will save the utility and its customers an estimated $400 million over the next 30 years. In part, the savings come from using a cheaper fuel, but the utility will also avoid the expense of upgrading obsolescent, inefficient old equipment and installing costly controls to meet what it expects will be increasingly stringent federal pollution standards.  (See related blog post: "EPA's Smokestack Rules By The Numbers.") FPL says the new plant will cut both carbon dioxide and total emissions by 90 percent compared to the old plant, which has been criticized for years as a major pollution source.

"When we did the analysis, it seemed to make more sense to tear down the old plant and build a new one than it did to modernize," Brostowicz said.

Drive to Destroy
Port Everglades is just the latest fossil fuel relic to be torn down in a drive that is gaining momentum. Across the United States, utilities are shutting down and sometimes demolishing aging power-generating facilities, most of which burn coal. According to the U.S. Energy Information Administration, from 2012 to 2016, utilities expect to retire 175 plants that currently are capable of producing a combined 27 gigawatts of electricity. That amounts to 8.5 percent of the nation's total coal-fired capacity in 2011.

In Chula Vista, California, for example, crowds gathered in February to watch the South Bay Power Plant implode into a massive cloud of dust, while in Salem, Massachusetts, Footprint Power is in the process of demolishing an oil-burning power plant whose 50-year-old smokestacks had been around so long that the company had to seek approval from the local historic commission. Footprint Power also plans to replace its old workhorse with a modern natural gas power plant of the sort that FPL is building in Port Everglades.

There are multiple reasons behind the rising wave of plant teardowns, but it all comes down to economics, according to Revis James, a research director for the Electric Power Research Institute, a nonprofit research and development organization funded by the electric power industry. Plants that generate electricity are eminently durable, and many of the 50-year-old facilities being torn down could have lasted for another 10 to 20 years, he says. But they're no longer needed. "The economy has been struggling for the past few years, so the growth of electrical demand has been flat or even declined," he said. "Companies just don't need the capacity, so they'll close older plants."

Additionally, the older plants are so inefficient it would require costly refitting to keep their fuel costs competitive, James said. And the cost of upgrading pollution controls to meet future requirements makes aging plants a less attractive investment. A report by Burns & McDonnell, a Kansas City, Missouri-based engineering, design, and construction firm, notes in particular that existing power plants are to face stringent new limits on emissions of mercury, acid gases, and other hazardous pollutants starting in 2015.

To Mothball, or to Detonate?
Power companies are pondering a variety of options. Some merely mothball old plants—called "layups" in industry parlance—so they can be brought back online if electrical demand increases. Others tear down old plants and do the extensive cleanup necessary to convert the land to other uses. According to a 2011 report by the American Clean Skies Foundation, an advocacy group based in Washington, D.C., and funded by the natural gas industry,  at least 10 decommissioned power plants around the United States have been turned into office or commercial space or museums, or else are under consideration for such development.

Still other utilities, such as FPL, chose to build new natural-gas power plants on the site of the demolished facilities. As Brostowicz explains, that approach enables a plant operator to save money by using the same infrastructure—electrical transmission lines, for example—as the old plant. In the case of Port Everglades, about 90 percent of the building materials from the existing plant will be salvaged and used in the new one.

Utility companies are touting the replacement of old plants as a win-win for both energy consumers and the environment. But environmental activists are less sanguine. Tearing down the old plants is a difficult, complex process that requires many months of work; even after Port Everglades' towers fall, for example, it will take the rest of 2013 to completely demolish and remove the rest of the plant.

Care must be taken to properly dispose of hazardous materials. In Austin, Texas, for example, the demolition of an aging power plant has been delayed by eight months, after the company hired to disassemble the plant found far more asbestos inside it than had been anticipated.

In Florida, environmental activists aren't as concerned about potential toxic risks from demolishing the Port Everglades plant as they are skeptical about the natural gas plant that will replace it. (See related quiz: "What You Don't Know About Natural Gas.") While natural gas burns far more cleanly than coal, it still is a source of emissions that contribute to climate change. Matthew Schwartz, executive director of the South Florida Wildlands Association, says there is concern because methane, the main component of natural gas, is 25 times more potent than carbon dioxide as a greenhouse gas. Even a seemingly small amount of leakage "from the wellhead all the way along the pipeline" could end up having a major greenhouse impact, he said. (See related: "Good Gas, Bad Gas.") Even worse, Schwartz says,  the nation's current abundance of low-priced natural gas is due to hydraulic fracturing—more commonly known as "fracking"—which critics say poses serious local environmental risks, such as contamination of groundwater.

Schwartz and other local activists would prefer to see  increased emphasis upon solar energy, a source that they say is underutilized in Florida. Florida ranks third in the nation in solar potential, but only tenth in installed capacity, according to the Solar Energy Industries Association. "This is the Sunshine State, and we have more potential than any other state in the eastern U.S.," he said. "But it isn't being used. Instead, we're going to burn natural gas from up North. We're not taking advantage of what we have."