Posted by lillianbarbeito on Thursday, 15 August 2013 in Transportation 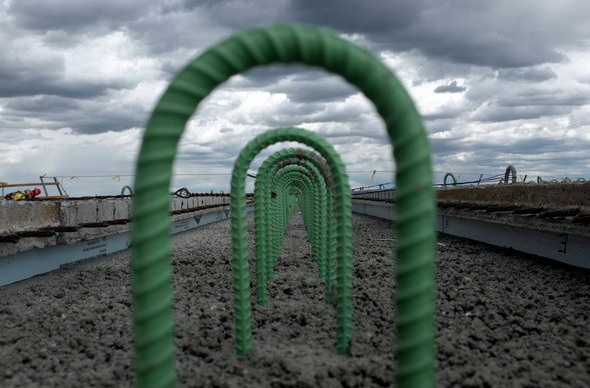 DENVER — Driving to Boulder from here offers a spectacular mountain panorama, but the nearer view is anything but impressive. U.S. 36, the unlovely highway that connects the cities, is crowded and often painfully slow, dotted with malls, fast-food restaurants and other commercial flotsam.

It is, in other words, an average highway. But not for long. Work has begun on an upgrade for U.S. 36 that will incorporate a special fast lane for high-occupancy vehicles, bus rapid transit service, an electronic toll system for single-occupant cars and a bike path.

It is, in other words, a highway designed to encourage people to drive less.

Plenty of highway upgrades around the country now include some of these features — high-occupancy-vehicle lanes are widespread, and bike lanes are popping up here and there. In cities like Birmingham, Ala., Seattle, and Ann Arbor, Mich., the Obama administration is using federal money to help develop roadway projects that combine several ways of getting around.

But until now, no single highway plan has pulled all of them together, said Victor M. Mendez, the head of the Federal Highway Administration. “This innovative approach is what we’re looking for in the future,” he said. “It’s an exciting project.”

Donald E. Hunt, the executive director of the Colorado Department of Transportation, said when the first shovels turned dirt on U.S. 36 that the idea of offering many ways to travel on one road was simple: “More transportation options mean less time sitting in traffic.”

By 2005, the highway transportation research group TRIP ranked U.S. 36 as No. 1 among the state’s “heartburn highways,” based on poor maintenance, congestion and accidents.

Fixing this is not easy, and it will take years. Workers are replacing bridges over the highway to accommodate the extra lanes and creating temporary lanes on the shoulders so traffic is not squeezed by the construction and many objectives can be accomplished at once. “There’s no alternate, parallel way to get to Denver,” said John Schwab, the director of the lanes project for the Colorado Department of Transportation. “It’s a very important corridor for all of the residents.”

The project is also expensive. The first phase, which will cost $312 million, will be financed with federal stimulus money and highway funds, as well as money from state and private sources. The second phase will include money from private investors who will receive a share of the tolls until 2063.

The toll element of the financing package has some groups wary. U.S. PIRG, the consumer group, has conducted studies that suggest that governments often give too much away when bringing in private partners for long-term contracts. Phineas Baxandall, the group’s senior analyst for tax and budget policy, called the Colorado plan a “mixed bag.”

“There are a lot of positive things about this project,” he said, “but the private financing is essentially just a high-priced loan. Instead of raising more of their own public revenue to finance the road, the state will make larger annual payments to the private road builders.”

But Colorado community activists are excited about transforming a mundane highway expansion into something that accommodates more transportation options than the family sedan, said Ms. DeBarros, the leader of the commuter group. “That’s what we’ve been working on: a 21st-century mobility project, not just traditional auto road capacity,” she said. “People really do want to be able to bike, to be able to walk places, and not assume that driving in their car is the only way to travel every day.”

To Barton Kiburz, what is important is the coming bike path. Mr. Kiburz, who works at Hunter Douglas, the window coverings company, said that his commute by bike will be shorter, safer and more level than it is on the route he now takes. “It can be a challenge to try to piece together the trails to find the safest route,” he said.

He and his wife have just one car, he said, so “when she has the car, I use the bike” for commuting and some shopping. The new highway route, he said, will shorten his trips to Denver to 11 miles from 25. “Even cars don’t want to drive more than they have to,” he said. “When you’re on a bike, it’s a huge difference — you’re your own engine.”