Posted by Gobec Mitja on Sunday, 25 August 2013 in Forestry 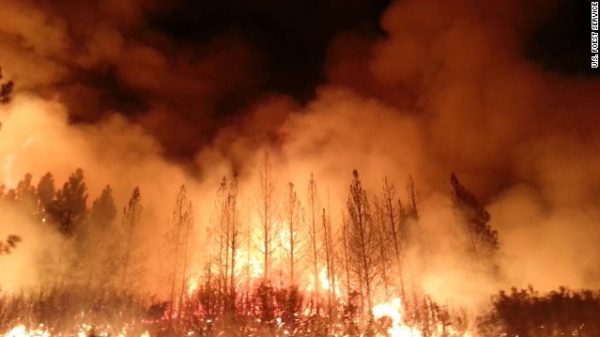 SAN FRANCISCO – A massive fire burning near Yosemite National Park continued its spread Sunday, threatening not only ancient giant sequoia groves but also the municipal water and power system for San Francisco and nearby cities. The most-visited areas of Yosemite National Park are not in danger, officials said.

Nearly 2,850 firefighters are battling the blaze, some from as far away as Florida, and more are being drafted to help, he said. As of 10 a.m. local time Sunday, the fire was 7% contained.

"It's the highest priority fire in the country right now because of its location, because Yosemite National Park is at risk. It's not just a national treasure, it's a world treasure," Fleishman said.

There were dozens of smaller fires burning across the West, officials said. The largest was the Beaver Creek Fire in Idaho, which has scorched more than 111,000 acres. It is now over 80% contained, according to the federal fire tracking site InciWeb.

California Gov. Jerry Brown has declared a state of emergency for San Francisco because the fire also threatens the city's water and electrical infrastructure.

Much of the San Francisco Bay area gets its water from the Hetch Hetchy reservoir behind O'Shaughnessy dam, including about 2.6 million customers in San Francisco and nearby towns. The famously pure water travels 160 miles entirely through gravity-fed pipes. As of Sunday morning there was no damage to the reservoir and the water was still clear and clean, despite fears that ash could fall into the reservoir. "The turbidity levels are fine," said Fleishman, referring to a measurement of particles in the water.

A secondary concern is the power generated by the dam, which creates the reservoir. It generates hydroelectric power used for some municipal buildings in the city, including the airport and San Francisco General Hospital.

The system has three powerhouses, two of which were taken offline Saturday because of possible damage. The third, Moccasin Powerhouse, was still generating power on Saturday, according to the San Francisco Public Utilities Commission.

So far the fire is several miles away from the dam but there is concern that it could put the power lines at risk if it gets closer, Fleishman, said. Surveys by power crews Saturday night found about 12 miles of power lines had been damaged.

Even if the powerhouses were all shut down there would be no loss of power in San Francisco. The city's electrical infrastructure is linked to the main electrical grid and it would simply purchase power to supplement the lost transmissions, officials said. Since the fire began Aug. 19 the city has so far purchased about $600,000 in supplemental power, the Public Utilities Commission web site said.

The dam itself is impervious to fire. "It's a massive concrete structure and won't be harmed," said Fleishman. The concern is "mostly about the power lines and water quality."

The fire is about 20 miles from the iconic Yosemite Valley, home to Half Dome, the Ahwahnee Hotel and Curry Village. "There is no imminent threat of any kind," Medema said.

It would take "days and days and weeks" for the fire to get that far. The park's hotels and campgrounds are full and aside from a slight tinge of smoke in the air it's impossible to tell there are fires, he said.

Park officials are concerned about the safety of two groves of giant sequoiatrees, the Tuolumne Grove and the Merced Grove. These massive trees are some of the largest living things on Earth and some are believed to be more than 2,000 years old.

Both groves are surrounded by wilderness. Firefighters have built fire lines around the groves to protect them, clearing brush and undergrowth in a broad circle "so the fire that's creeping along the ground can't cross over," Medema said.

Although sequoia are naturally fire resistant due to their thick bark, "in a fire of this size you always want to have protective measures in place," he said.

Some historical buildings in the area are being protected by sprinkling the surrounding grounds with water. Fire fighters are also wrapping the wooden shake roofs with aluminum fireproof material. "They look like baked potatoes," Medema said.

Highway 120 into the park from the west is closed, but all the other main park roads are open, said Medema.

Fire officials expected Sunday to be a continuation of the fire's previous behavior. The fire burns actively until about 3 or 4 a.m. most nights and then "lays down" as the winds subside, the temperature drops and humidity rises, Friedman said. It begins to perk back up again between noon and 2 p.m. Forecasters were predicting a windy Sunday with gusts up to 25 miles per hour, which will cause it "to get real active," he said.