Posted by thatsenough on Wednesday, 02 October 2013 in Earth Violators 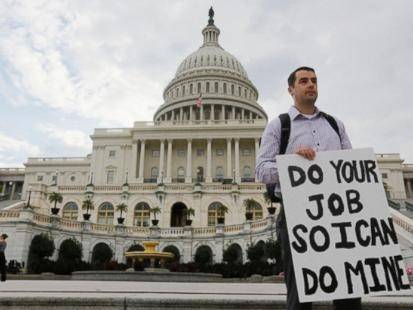 Congress was unable to pass the funding bill before the deadline, and as of midnight tonight the US government has begun shutting down.

The US government is headed for a shutdown after members of Congress were unable to reach a compromise on the federal budget. They have until midnight tonight to pass a new funding bill in time for the start of fiscal year 2014. If they can’t make it in time, about 800,000 civilian workers, about 40 percent of the entire US federal government’s civilian workforce, will be required not to work. Many of them will be furloughed without pay.

It’s unclear just how long the great shutdown of 2013 would last, but if history is any indication, it could be a while. The US government has closed its doors 17 times previously, and the last time was also the longest — back in 1995, Congressional Republicans and the Clinton administration managed to keep the government dark for 21 days. The impending shutdown this year is also largely the result of party politics, with the Republican-led House trying to defund the healthcare reform law backed by the president (nicknamed "Obamacare"), which goes into effect tomorrow.

LARGELY THE RESULT OF PARTY POLITICS

But looking beyond the questions of the moment and the political fight that’s holding America’s finances hostage, it’s already clear that the most severe consequences of the shutdown will be felt by those government agencies specializing in science, technology, health, and the environment. Here’s a rundown of what to expect:

The National Aeronautics and Space Administration will see over 90 percent of its civilian workforce immediately furloughed: 17,701 out of 18,250 total employees, according to the shutdown plan the agency filed last week. As President Obama put it in an emergency address last night, "NASA will shut down almost entirely, but Mission Control will remain open to support the astronauts serving on the Space Station."

"NASA WILL SHUT DOWN ALMOST ENTIRELY."

NASA notes that there’s a crew of six astronauts aboard the station now that it can’t abandon, and that operating the ISS requires ground controllers on duty 24 hours a day, 7 days a week, who send about 1,000 commands to the station every day. If the shutdown drags on, NASA also points out that employees will be needed to help launch crew and cargo to the station aboard Russian Soyuz spacecraft, and to return crew from orbit. The next mission to carry crew to the station is scheduled for November 6th.

In Florida, NASA’s historic Kennedy Space Center is likely to see most of its 2,085 civilian employees and another 4,384 private contractors asked to stay home. Not surprisingly, government officials are worried about the effects of an extended shutdown on the economy, especially coming on the heels of the closure of the space shuttle program in 2011, in which thousands of jobs were shed.

"SUDDENLY THE SHUTDOWN OF NASA STARTS AFFECTING THE WHOLE COMMUNITY."

"A good chunk of the population work out at Kennedy Space Center," says Don Walker, communications director of the Brevard County, Florida, government. "If they don’t get paid, or aren’t working, they’re not going to be going out to restaurants or the movies, and suddenly the shutdown of NASA starts affecting the whole community." He continues: "We barely kept our head above water just long enough to get through the end of the space shuttle program, this could be a double whammy."

The EPA, by its own count, has about 16,200 people on the payroll. But only 1,069 or about 6.5 percent, of those are staying on — either because they're doing vital work or because another fund is paying their bills, according to the agency’s shutdown plan. The former category is essentially a reminder of all the things we depend on the government to do. Would you like someone to keep managing the sites where toxic waste is being cleaned up (so-called "Superfunds")? The EPA has you covered.

As the shutdown plan explains: "For example, if ceasing the operation of an acid mine drainage treatment plan would cause a release to a stream that provided drinking water to a community, the agency would consider that situation to pose an imminent threat."

"THE AGENCY WOULD CONSIDER THAT SITUATION TO POSE AN IMMINENT THREAT."

Not all Superfund work is dependent on the bill being debated, which also helps employees stay at work. Like other agencies, the EPA is taaking employees with maintaining important facilities: some people will stay behind to stop lab animals from dying and make sure long-running tests can keep going. A skeleton crew will still be around should an environmental disaster occur, and attorneys and law enforcement will be able to prosecute cases and enforce rules.

This still doesn't mean business will be going on as usual. If your work is absolutely necessary, you can still only show up for the time it takes to complete it: if you have to spend an hour a day managing something, you'll spend that hour and not a minute more. So when EPA head Gina McCarthy said a few days ago that a furlough would mean that her agency "effectively shuts down," she wasn’t exaggerating.

However long the shutdown lasts, the government’s science, technology and health arms will be taking the biggest hits. It follows that the people who depend on them will be out of luck, too.