Posted by scarlett on Friday, 27 December 2013 in Energy Efficiency 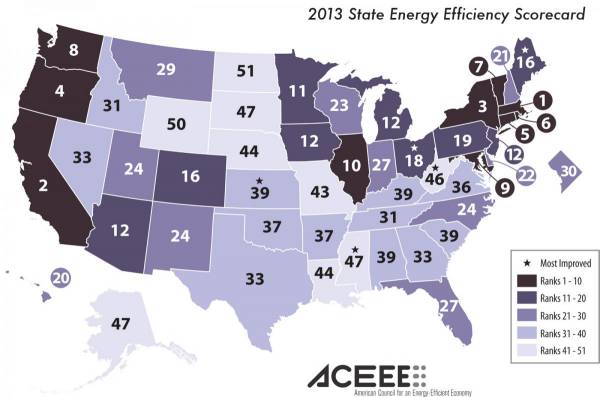 Conversations about energy use in the U.S. often revolve around expanding domestic production or spurring renewables. It’s easy to forget another significant piece of the puzzle – energy efficiency. In its 2013 scorecard, the American Council for an Energy-Efficient Economy (ACEEE) ranks the most energy-efficient states based on policy and program efforts that improve efficiency in homes, businesses, industries and transportation systems.

In the rankings, ACEEE examined six policy areas in which states typically pursue energy efficiency and assigned points based on performance. The criteria used in the rankings (shown with their respective weights) include: Utility and public benefits programs and policies (40 percent), Transportation policies (18 percent), Building energy codes and state government initiatives (14 percent each), combine heat and power (10 percent) and Equipment efficiency standards (4 percent).

Based on that criteria, the results show the following 10 states as the most efficient in 2013 with the number of points earned (out of a possible 50):

Massachusetts retained the top spot in the rankings for the third year in a row, after overtaking California in 2011. New York and Oregon also maintained their positions on the list, although Connecticut  is closing the gap after passing a major energy bill earlier this year. This is the first year that Illinois has broken into the top 10.

The bottom 10 states in 2013 were (starting with the lowest ranked):

The bottom performers haven’t changed much since last year, but point totals improved marginally overall and some states, such as Mississippi and West Virginia, were able to climb in the rankings by passing energy legislation and adopting stronger building codes.

“In every region we are seeing states embrace energy saving measures with growing enthusiasm,” ACEEE Executive Director Steve Nadel said of the results. “From Massachusetts, which continues to be the pacesetter in the race to cut down energy waste, to Mississippi, which is emerging as a regional star, state governments are proving that smart policy can still cross partisan divides.”

While it’s surely worthwhile to give top performing states an enthusiastic thumbs-up for smart energy policies, these policies don’t always equate to reduced energy consumption, as Triple Pundit’s RP Siegel pointed out last year. Based on 2011 data from the Energy Information Administration (the most recent EIA data available), five of the ACEEE’s top 10 states were also in the top 10 for lowest actual usage. The other five lowest consuming states according to EIA data ranked anywhere from 12 (Arizona) to 33 (Nevada) on the ACEEE list.

That said, the rankings match more closely at the other end of the spectrum. Seven of the highest consuming states appeared in ACEEE’s bottom 10 – indicating that although top-notch public programs don’t always mean the lowest consumption, leaving efficiency out of energy policies entirely will likely yield poor results. For states like Mississippi, which ranked the lowest on ACEEE’s list last year with a mere 2.5 points, integrating efficiency into energy policy may prove to be a quick and cost effective strategy for lowering demand on public utilities and shrinking bills for homeowners.

“Cutting down on energy waste has become an integral strategy for securing Mississippi’s energy future,” said Brandon Presley, the state’s public service commissioner, adding that the state hopes to draw cost savings benefits from efficiency legislation. Mississippi appeared on ACEEE’s list of of the top five most improved states in 2013, along with West Virginia, Maine, Kansas and Ohio.

Rather than a definitive list of “best” and “worst” performers, ACEEE said it hopes its annual scorecards will attract attention from legislators, regulators and citizens and increase awareness of energy efficiency as a “crucially important” state resource.

“The State Scorecard report serves as a benchmark for state efforts on energy efficiency policies and programs each year, encouraging states to strengthen their efficiency commitments as a pragmatic and effective strategy for promoting economic growth, securing environmental benefits, and increasing their communities’ resilience in the face of uncertain energy costs and supplies,” the organization wrote in its 2013 report.

For more on the 2013 scorecard and detailed information for each state, visit the ACEEE online.

Based in Philadelphia, Mary Mazzoni is a freelance journalist who frequently writes about sustainability, corporate social responsibility and clean tech. Mary also contributes to Earth911; her work has appeared on the Huffington Post, Sustainable Brands and The Daily Meal. You can follow her on Twitter @mary_mazzoni.