Posted by greenmonkey on Saturday, 01 March 2014 in Fossil Fuels 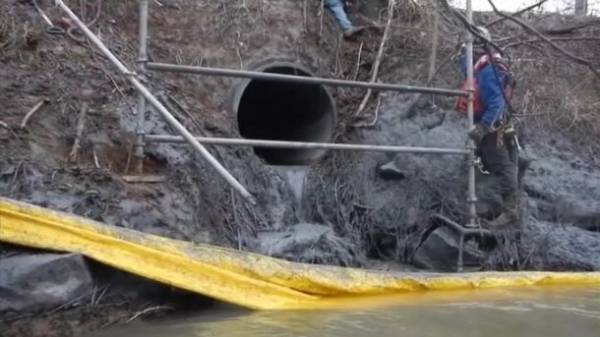 From now on, regulators were told, they must focus on customer service, meaning issuing environmental permits for businesses as quickly as possible. Big changes are coming, the official said, according to three people in the meeting, two of whom took notes. “If you don’t like change, you’ll be gone.”

But when the nation’s largest utility, Duke Energy, spilled 39,000 tons of coal ash into the Dan River last month, those big changes were suddenly playing out in a different light. Federal prosecutors have begun a criminal investigation into the spill and the relations between Duke and regulators at the environmental agency.

The spill, which coated the river bottom 70 miles downstream and threatened drinking water and aquatic life, drew wide attention to a deal that the environmental department’s new leadership reached with Duke last year over pollution from coal ash ponds. It included a minimal fine but no order that Duke remove the ash — the waste from burning coal to generate electricity — from its leaky, unlined ponds near drinking water. Environmental groups said the arrangement protected a powerful utility rather than the environment or the public.

Facing increasing scrutiny and criticism, the department said late Friday that the company would be cited for two formal notices of violating environmental standards in connection with the spill. It is not clear what fines or other penalties could result.

“These are violations of state and federal law, and we are holding the utility accountable,” said the state environmental secretary, John E. Skvarla III.

Asked for comment, a spokeswoman said Duke will respond to the state.

Current and former state regulators said the watchdog agency, once among the most aggressive in the Southeast, has been transformed under Gov. Pat McCrory into a weak sentry that plays down science, has abandoned its regulatory role and suffers from politicized decision-making.

The episode is a huge embarrassment for McCrory, who worked at Duke Energy for 28 years and is a former mayor of Charlotte, where the company is based. And it has become yet another point of contention in North Carolina, where Republicans who took control of the General Assembly in 2011 and the governor’s mansion last year have passed sweeping laws in line with conservative principles. They have affected voting rights and unemployment benefits, as well as what Republicans called “job-killing” environmental regulations, which have received less notice.

Critics say the accident, the third-largest coal ash spill on record, is inextricably linked to the state’s new environmental politics and reflects an enforcement agency led by a secretary who suggested that oil was a renewable resource and an assistant secretary who, as a state lawmaker, drew a bull’s-eye on a window in his office framing the environmental agency’s headquarters.

“They’re terrified,” said John Dorney, a retired supervisor who keeps in touch with many current employees. “Now these people have to take a deep breath and say, ‘I know what the rules require, but what does the political process want me to do?’”

Duke has apologized for the Dan River spill and says it is now committed to cleaning up some of its 32 coal ash ponds across the state. The company has also been subpoenaed in the federal investigation.

A spokesman for McCrory said the governor had no role in the state’s proposed settlement with Duke. On Tuesday, amid continuing concerns about the threat of future spills, he took a tougher stance than in the past, writing to Duke’s chief executive that he wanted the waste ponds, some sprawling over many acres, to be moved away from the state’s waterways.

The environmental agency’s embattled secretary, Skvarla a McCrory appointee, pushed back last week on criticism of last year’s deal, under which the $50 billion company was fined only $99,111 for leaks from coal ash ponds at two power plants. The accusation that his department “and Duke Energy got together and made some smoky back-room deal with a nominal fine is simply not true,” Skvarla told reporters.

The fine was determined by a formula in the law, he said. The agency reached a settlement that allowed Duke to study its coal ash ponds, rather than immediately remove the slurry of ash and water, because it wanted to avoid being tied up in court for years, he said.

But current and former agency employees said the treatment of Duke was typical of the pro-industry bias in place under McCrory, Skvarla and the General Assembly.

Last year, the environment agency’s budget for water pollution programs was cut 10.2 percent, a bipartisan commission that approves regulations was reorganized to include only Republican appointees, and the governor vastly expanded the number of agency employees exempt from civil service protections, to 179 from 24.

The effect, said midlevel supervisors who now serve at the pleasure of the governor, is that they are hesitant to crack down on polluters who might complain to Skvarla or a lawmaker, at the risk of their jobs. Several spoke anonymously out of fear of being fired.

“They want to have a hammer to come down on anybody who hinders developers by enforcing regulations,” said a supervisor whose department is supposed to regulate businesses under laws devised to protect water quality. “We’re scared to death to say no to anyone anymore.”

A second supervisor, also speaking on the condition of anonymity, said: “A lot of us never considered ourselves political creatures. What’s happened here has really blown us out of the water. People speak in hushed tones in the hallway to each other. We go offsite to talk. It’s totally changed the culture of this organization.”

Skvarla said in an interview that he was “speechless” to hear such a sentiment, adding, “I think we have taken politics out of this agency.”

He added: “When I was hired by Governor McCrory, he said, ‘I want to do two things: I want you to protect the environment, and I want you to help us grow this economy. We have to help people through the regulatory maze.’”

Susan Wilson, an environmental engineer who inspected storm-water runoff at factories and subdivisions, quit last year after her duties were transferred to another department with little expertise in the subject. She said the bureaucratic shuffle was meant to satisfy developers.

“Business is important, but there should be a balance between the regulated community and the environment,” Wilson said. “It’s all out of balance here.”

Despite deep cuts from the state budget, the agency’s new leadership turned back $582,000 in grants from the federal Environmental Protection Agency to monitor wetlands and study the impact of hydraulic fracturing for natural gas on waterways.

Amy Adams, a former supervisor who left the agency last year, said the mantra of the current leadership was about “customer service,” but that did not include citizens who might live downstream from a polluter.

She and others said they were told to stop writing Notices of Violation to polluters, which can prompt fines, and instead to issue a Notice of Deficiency, which she likened to a state trooper giving a warning instead of a speeding ticket.

“I was asked directly by members of my staff, ‘Do we even do enforcements anymore?’” said Adams, who wrote an opinion column about the agency’s “soul-crushing takeover” for The News & Observer of Raleigh after she resigned.

Adams, who now works for Appalachian Voices, an environmental group in Boone, N.C., said that because of the Dan River spill, the state agency has engaged in “revisionist history” about its regulation of Duke Energy.

The agency took action against Duke only after environmental groups filed notice that they intended to sue the utility to clean up the ash waste at power plants near Asheville and Mount Holly, N.C.

The longtime practice of dumping ash waste in ponds became a major concern after a catastrophic failure of one in Tennessee in 2008, which is costing $1.2 billion to clean up.

Under the federal Clean Water Act, citizen groups may sue polluters if state regulators do not do their job. But the law also allows states to intervene and take over the lawsuits, which is what the Department of Environment and Natural Resources did last year. Environmentalists say the state offered a favorable deal to Duke and blocked their lawsuits, which could have forced Duke to relocate the ash to lined pits away from drinking water.

“They did a behind-closed-doors settlement with the lawbreaker, and it requires no cleanup of 1 ounce of pollution or movement of one ounce of ash,” said Frank Holleman, a senior lawyer with the Southern Environmental Law Center, which sued on behalf of environmental groups. “The state has been a barrier at every turn.”

Skvarla, the agency secretary, said the deal the state reached with Duke in July was a more practical fix to the leaky ash ponds than what environmentalists sought.

“Their only acceptable remedy was, dig ’em up, move them to lined landfills and cover them,” he said. “We’re talking 14 facilities and 32 coal ash ponds. I can assure you it’s not that simple.”

The size of the Feb. 2 spill has been revised down from early estimates. As the federal Fish and Wildlife Service monitors the river water for long-term harm to fish and mollusks, attention is turning to a federal court in Raleigh, where employees of Duke and the environmental agency are to appear before a grand jury on March 18.

Meanwhile, the agency has reversed its earlier positions on Duke and coal ash cleanup. On Feb. 10, eight days after the spill, the agency withdrew its deal with Duke. This week, it said it might order the remaining ash at the Dan River site, in Eden, N.C., to be moved and stored in a lined landfill — what environmentalists had sought all along.