Lonesome George, the last surviving Pinta Island giant tortoise, has died at his home in the Galapagos Islands. Scientists believe he was more than 100 years old. 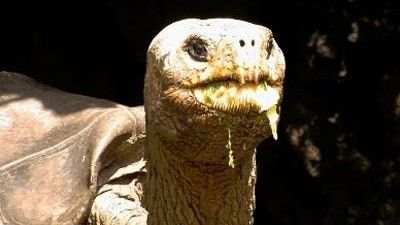 Staff at the Galapagos National Park in Ecuador say George, the only remaining member of his subspecies (Chelonoidis abingdoni), was found dead by his long-term keeper, Fausto Llerena.

In a statement the national park said Llerena had been "unhappily surprised" to discover his charge "stretched out in the direction of his watering hole with no signs of life," on Sunday morning.

"We are terribly saddened that the world lost a legend and one of the most important figures in conservation to date. Lonesome George passed away on June 24th, 2012 at 8 am in the Galapagos found by Fausto Llerena. He was not only an icon but also the inspiration behind everything that we do at Lonesome George & Co. We loved him dearly and his message will continue to drive us to create change so that situations like his don't happen again. As Agents of Change, we must understand there is an urgency to recognize issues in our communities before they get to the point that they are irreversible. Lonesome George's legacy will live on in all of us."
Eduardo Balarezo
Lonesome George & Co. Founder