Posted by plantitfilm on Sunday, 30 March 2014 in Climate Change 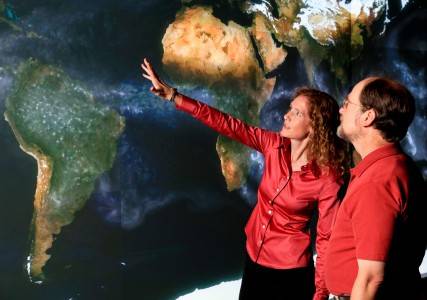 Much of the extreme weather that wreaked havoc in Asia, Europe and the Pacific region last year can be blamed on human-induced climate change, according to the World Meteorological Organization.

The U.N. weather agency's annual assessment Monday said 2013 was the sixth-warmest year on record. Thirteen of the 14 warmest years have occurred in the 21st century.

Rising sea levels has led to increasing damage from storm surges and coastal flooding, as demonstrated by Typhoon Haiyan, the agency's Secretary-General Michel Jarraud said. The typhoon in November killed at least 6,100 people and caused $13 billion in damage to the Philippines and Vietnam.

Australia, meanwhile, had its hottest year on record.

"Many of the extreme events of 2013 were consistent with what we would expect as a result of human-induced climate change," Jarraud said.

He also cited other costly weather disasters such as $22 billion damage from central European flooding in June, $10 billion in damage from Typhoon Fitow in China and Japan, and a $10 billion drought in much of China.

Only a few places -- including the central United States -- were cooler than normal last year, but 2013 had no El Nino, the warming of the central Pacific that happens once every few years and changes rain and temperature patterns around the world.

Jarraud spoke as top climate scientists and representatives from about 100 governments with the U.N.'s Intergovernmental Panel on Climate Change met in Japan to complete their latest report on climate change's impact on hunger, disease, drought, flooding, refugees and war.

The key message from leaked drafts and interviews with the authors and other scientists: The big risks and overall effects of climate change are far more immediate and local than scientists once thought. It's not just about melting ice, threatened animals and plants. It's about the human problems of hunger, disease, drought, flooding, refugees and war, becoming worse.

Severe floods, such as the one that displaced 90,000 people in Mozambique in 2008, are now more common in Africa and Australia. Europe and North America are getting more intense downpours that can be damaging. Melting ice in the Arctic is not only affecting the polar bears, but already changing the culture and livelihoods of indigenous people in northern Canada.

Past panel reports have been largely ignored because climate change's effects seemed too distant in time and location and that mentality has to be changed, says Pennsylvania State University scientist Michael Mann.

"It's not far-off in the future and it's not exotic creatures -- it's us and now," says Mann, who didn't work on this latest report.

The key message can be summed up in one word that the overall report uses more than 5,000 times: risk.

"Climate change really is a challenge in managing risks," says the report's chief author, Chris Field of the Carnegie Institution of Science in California. "It's very clear that we are not prepared for the kind of events we're seeing."

The important nuance is how climate change is interacting and exacerbating problems people face today, says Katharine Hayhoe, a Texas Tech University climate scientist, who was not part of the panel.

A past critic of the panel's impact reports, Roger Pielke Jr., a science policy professor from the University of Colorado, said that the panel "made vast improvements to the quality of their assessments."

John Christy, a professor from the University of Alabama Huntsville, accepts man-made climate change, but thinks that its risks pale in comparison to poverty.

Not so, warn other scientists. The largest scientific organization in the world, the American Association for the Advancement of Science published a new fact sheet on climate change.

It reads: "Climate change is already happening. More heat waves, greater sea level rise and other changes with consequences for human health, natural ecosystems and agriculture are already occurring in the United States and worldwide. These problems are very likely to become worse over the next 10 to 20 years and beyond."

Speaking in Geneva, Jarraud drew special attention to studies and climate modeling examining Australia's recent heat waves, saying the high temperatures there would have been virtually impossible without the emissions of heat-trapping carbon dioxide from the burning of coal, oil and gas.

"It is not possible to reproduce these heat waves in the models if you don't take into account human influence," he said.