Posted by Wolf on Monday, 02 June 2014 in Sustainable Development 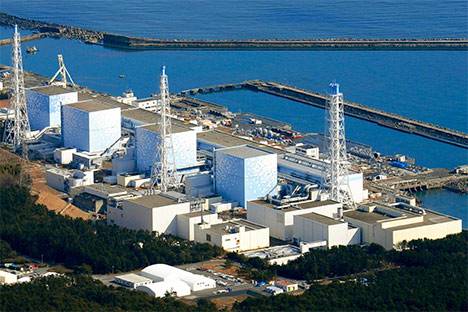 Japan on Monday started work on an underground ice wall at the crippled Fukushima nuclear plant, freezing the soil under broken reactors to slow the build-up of radioactive water, officials said.

The wall is intended to block groundwater from nearby hillsides that has been flowing under the plant and mixing with polluted water already there.

"We started construction of the frozen earth wall this afternoon," a TEPCO official told a news conference in Tokyo.

The government-funded scheme will see 1,550 pipes laid deep in the soil through which refrigerant will be piped to create the 1.5-kilometre (0.9-mile) frozen wall that will stem the inflow of groundwater.

"We plan to end all the construction work in March 2015 before starting trial operations," the company official said, adding that the ice wall could be fully operational several months after construction was completed.

The idea of freezing a section of soil, which was proposed for Fukushima last year, has previously been used to build tunnels near watercourses.

However, scientists point out that it has not been done on this scale before nor for the proposed length of time.

Coping with the huge—and growing—amount of water at the tsunami-damaged plant is proving to be one of the biggest challenges for TEPCO, as it tries to clean up the mess after the worst nuclear disaster in a generation, in which three reactors went into meltdown.

As well as all the water used to keep broken reactors cool, the utility must also deal with water that makes its way along subterranean watercourses from mountainsides to the sea.

Last month TEPCO began a bypass system that diverts groundwater into the sea to try to reduce the volume of contaminated water.

Full decommissioning of the plant at Fukushima is expected to take several decades.

An area around the site remains out of bounds, and experts warn that some settlements may have to be abandoned because of high levels of radiation following the 2011 accident.