Posted by Jrramos on Wednesday, 24 September 2014 in Climate Change

Leo DiCaprio tells UN about the importance of Climate Change 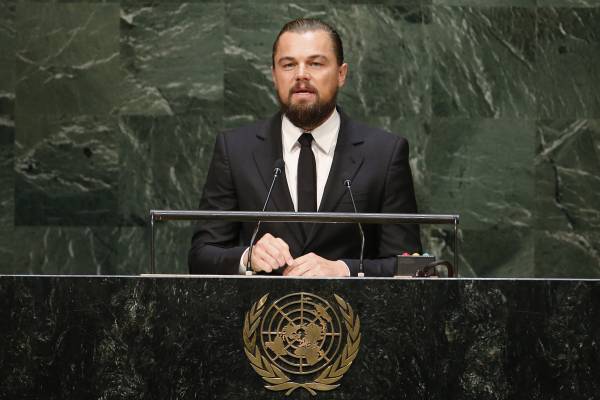 At the UN summit, after tens of thousands rallied across the world, France promised $US1 billion ($1.1bn) to the Green Climate Fund — making it the only contributor other than Germany to the new institution to help the worst-hit countries.

It was the first such event since the Copenhagen summit ended in disarray in 2009 and aims to set the tone for a climate-change conference in Paris intended to seal a new global agreement.

French President Francois Hollande said the Paris conference should deliver a “global and ambitious” deal and warned that climate change posed a “threat to world peace and security”.

US President Barack Obama, addressing the summit just hours after ordering airstrikes on Islamic State strongholds in Syria, said the “urgent and growing threat of climate change” would ultimately “define the contours of this century more dramatically than any other” issue.

“We know what we have to do to avoid irreparable harm,” Mr Obama said.

“We have to cut carbon pollution in our own countries to prevent the worst effects of climate change.”

He called for an “ambitious” but “flexible” agreement — a nod to political difficulties he would face if he needed the US congress to ratify a treaty.

Developing nations have baulked at signing on to a binding accord without firm US commitments, noting that wealthy countries bear historic responsibility for climate change.

Mr Obama said he met in New York with Chinese Vice-Premier Zhang Gaoli — President Xi ­Jinping was notably absent — and told him that the world’s two ­largest economies “have a special responsibility to lead” on climate change.

Mr Zhang said China, which has surpassed the US as the world’s top carbon polluter, ­wanted its emissions to peak as soon as possible.

He was not more specific, but senior official Xie Zhenhua said China was making good on ­reductions in its carbon intensity and would announce early next year a prediction of when its emissions would peak.

Mr Ban said that $US2.3bn had been pledged to the Green ­Climate Fund, but the amount was well below the $US10bn aimed for by the end of the year — let alone the $US100bn-a-year aim starting in 2020 to help poor ­nations cope with rising temp­eratures and disasters.

With France and Germany ­accounting for $US2bn of the amount, Tim Gore, head of ­climate policy for aid group Oxfam, criticised the “partial and piecemeal response” to climate change from donors.

Activist movement ActionAid said that the summit offered only “vague promises” on climate change despite the unprece­dented international demonstrations on Monday that had urged immediate action.

“We welcome new pledges of money from France and others, but they fall well short of what’s needed,” said ActionAid USA’s Brandon Wu.

Small island nations fear that climate change will literally wipe them out as water levels rise, ­turning their people into envi­ronmental refugees.

“Tuvalu’s future is in your hands. The time for denial, for hesitation, for pandering to the interests of the fossil-fuel industry is over,” said the Pacific island’s Prime Minister, Enele Sosene Sopoaga.

In one notable promise, New York Mayor Bill de Blasio vowed that the metropolis — and host of the UN — would cut its ­emissions by 80 per cent by 2050, a level of ambition that activists say is ­needed at a national level.

Nations including Democratic Republic of Congo, Ethiopia, Guatemala and Uganda said they would restore 30 million hectares of tropical forest, far ahead of the 20 million hectares already pledged through a global initiative.

Leonardo DiCaprio brought star power to the UN summit, urging leaders to stop treating global warming as if it were a ­fiction.

“As an actor, I pretend for a ­living. I play fictitious characters often solving fictitious problems,” DiCaprio, sporting a ponytail and suit and tie, told the summit.

“I believe mankind has looked at climate change in that same way — as if it were fiction.”