Posted by archerzhh on Monday, 27 April 2015 in Fishing

Where do your Fish Come From? Ask your grocer! 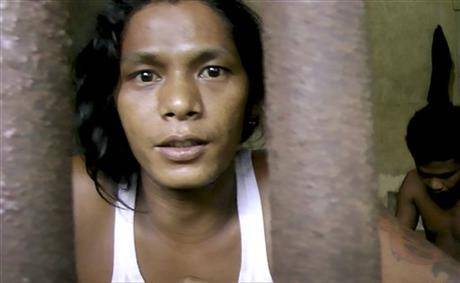 BENJINA, Indonesia (AP) — The Burmese slaves sat on the floor and stared through the rusty bars of their locked cage, hidden on a tiny tropical island thousands of miles from home.

Just a few yards away, other workers loaded cargo ships with slave-caught seafood that clouds the supply networks of major supermarkets, restaurants and even pet stores in the United States.

But the eight imprisoned men were considered flight risks — laborers who might dare run away. They lived on a few bites of rice and curry a day in a space barely big enough to lie down, stuck until the next trawler forces them back to sea.

"All I did was tell my captain I couldn't take it anymore, that I wanted to go home," said Kyaw Naing, his dark eyes pleading into an Associated Press video camera sneaked in by a sympathetic worker. "The next time we docked," he said nervously out of earshot of a nearby guard, "I was locked up."

Here, in the Indonesian island village of Benjina and the surrounding waters, hundreds of trapped men represent one of the most desperate links criss-crossing between companies and countries in the seafood industry. This intricate web of connections separates the fish we eat from the men who catch it, and obscures a brutal truth: Your seafood may come from slaves.

The men the AP interviewed on Benjina were mostly from Myanmar, also known as Burma, one of the poorest countries in the world. They were brought to Indonesia through Thailand and forced to fish. Their catch was then shipped back to Thailand, where it entered the global stream of commerce.

Tainted fish can wind up in the supply chains of some of America's major grocery stores, such as Kroger, Albertsons and Safeway; the nation's largest retailer, Wal-Mart; and the biggest food distributor, Sysco. It can find its way into the supply chains of some of the most popular brands of canned pet food, including Fancy Feast, Meow Mix and Iams. It can turn up as calamari at fine dining restaurants, as imitation crab in a California sushi roll or as packages of frozen snapper relabeled with store brands that land on our dinner tables.

In a year-long investigation, the AP talked to more than 40 current and former slaves in Benjina. The AP documented the journey of a single large shipment of slave-caught seafood from the Indonesian village, tracking it by satellite to a gritty Thai harbor. Upon its arrival, AP journalists followed trucks that loaded and drove the seafood over four nights to dozens of factories, cold storage plants and the country's biggest fish market.

The tainted seafood mixes in with other fish at a number of sites in Thailand, including processing plants. U.S. Customs records show that several of those Thai factories ship to America. They also sell to Europe and Asia, but the AP traced shipments to the U.S., where trade records are public.

By this time, it is nearly impossible to tell where a specific fish caught by a slave ends up. However, entire supply chains are muddied, and money is trickling down the line to companies that benefit from slave labor.

The major corporations contacted would not speak on the record but issued statements that strongly condemned labor abuses. All said they were taking steps to prevent forced labor, such as working with human rights groups to hold subcontractors accountable.

Several independent seafood distributors who did comment described the costly and exhaustive steps taken to ensure their supplies are clean. They said the discovery of slaves underscores how hard it is to monitor what goes on halfway around the world.

Santa Monica Seafood, a large independent importer that sells to restaurants, markets and direct from its store, has been a leader in improving international fisheries, and sends buyers around the world to inspect vendors.

"The supply chain is quite cloudy, especially when it comes from offshore," said Logan Kock, vice president for responsible sourcing, who acknowledged that the industry recognizes and is working to address the problem. "Is it possible a little of this stuff is leaking through? Yeah, it is possible. We are all aware of it."

The slaves interviewed by the AP had no idea where the fish they caught was headed. They knew only that it was so valuable, they were not allowed to eat it.

They said the captains on their fishing boats forced them to drink unclean water and work 20- to 22-hour shifts with no days off. Almost all said they were kicked, whipped with toxic stingray tails or otherwise beaten if they complained or tried to rest. They were paid little or nothing, as they hauled in heavy nets with squid, shrimp, snapper, grouper and other fish.

Some shouted for help over the deck of their trawler in the port to reporters, as bright fluorescent lights silhouetted their faces in the darkness.

"I want to go home. We all do," one man called out in Burmese, a cry repeated by others. The AP is not using the names of some men for their safety. "Our parents haven't heard from us for a long time. I'm sure they think we are dead."

Another glanced fearfully over his shoulder toward the captain's quarters, and then yelled: "It's torture. When we get beaten, we can't do anything back. ... I think our lives are in the hands of the Lord of Death."

In the worst cases, numerous men reported maimings or even deaths on their boats.

"If Americans and Europeans are eating this fish, they should remember us," said Hlaing Min, 30, a runaway slave from Benjina. "There must be a mountain of bones under the sea. ... The bones of the people could be an island, it's that many."