The Plan to Bring Nature Back to the Los Angeles River 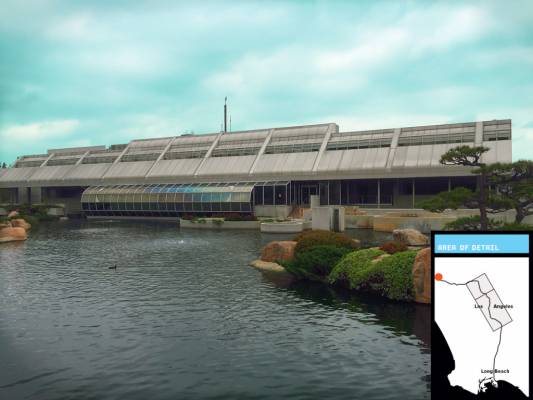 ON THE WESTERN side of the San Fernando Valley, behind the bleachers of Canoga Park High School, two concrete drainage ditches merge. Here in parched Southern California, barely a trickle runs through these channels. Most days it’s more like a sheen of greenish moisture, a puddle filtering across clumped leaves and other debris. Yet this forlorn speck of infrastructure marks a literal and figurative watershed for greater Los Angeles. It’s here that two tributaries, the Arroyo Calabasas and Bell Creek, join to become the Los Angeles River. And that river, a long-neglected wasteland, is about to become an urban oasis: a linear, riparian Central Park.

First flowing east, the river turns right at Griffith Park and heads south past Glendale and downtown, crosses Lynwood and Compton, and empties into the Pacific Ocean at Long Beach. But for much of the waterway’s 51 miles, it is little more than an open storm drain. Once, fed by a groundwater basin in the valley that bubbled up near present-day Encino, the river nourished a lush coastal plain. It was the sole source of drinking water for the young city and for the orchards that lured hordes of settlers. The meandering, seasonal stream morphed into a roiling deluge during rainstorms. Catastrophic floods in the 1800s leveled buildings, toppled railroad bridges, and swept away residents. California embarked on complex flood control measures. But the river always fought back.

Finally, in the 1930s, the US Army Corps of Engineers stepped in—and brought thousands of workers, tens of millions of dollars, and a whole lot of cement. The Corps straightened, deepened, moved, and otherwise rebuilt the river into a “water freeway,” a channel for transporting treated storm water and wastewater to the sea. Along its now-stark course, trash and broken appliances accumulated. Adjacent neighborhoods turned their backs, distancing themselves with chain-link fences.

In the City of Angels, though, rebirth is axiomatic. By the 1980s, environmentalists began pushing to exhume the waterway. Finally, public opinion became, well, a torrent. Today the river is slated for an overhaul, backed by officials including LA mayor Eric Garcetti and even President Obama. Last spring the Corps agreed to remove concrete along 11 miles of the river. In its place: sloping green terraces and wetlands, cafés, and bike paths. (The city is buying former industrial sites for use as parkland.)

But the river will still be a kind of mirage, a trick of human engineering. The floodplain is a major US city. Almost half the flow during the dry season comes from treatment plants. Much of the rest is urban slobber, runoff from Angelenos washing cars or watering lawns. “It’s hard to understand how artificial the river really is,” says Lewis MacAdams, godfather of the movement and cofounder of Friends of the Los Angeles River.

This isn’t a restoration project. Transforming the river is a grand exercise in modern ecosystem manipulation. What Los Angeles is building is more like a monument to rivers—artificial, in perfect LA style, but constructed on ecological principles. A once-hostile environment will be terraformed into a hub of human activity. “This is the beginning of a golden time for the LA River,” MacAdams says. “You can almost taste it.” Then he reconsiders. “Well, that’s not really the word you’d want to use.”