Posted by EarthDude on Tuesday, 27 December 2011 in Wildlife Conservation 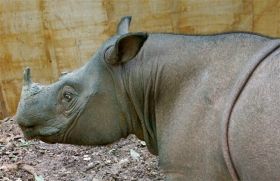 Conservationists and wildlife officials in the Malaysian state of Sabah airlifted a young female Sumatran Rhinoceros — one of the world's most endangered animals — to an area of forest where she would encounter a potential partner, reports the Sabah Wildlife Department and Borneo Rhino Alliance. Sumatran Rhinoceros populations are so low, some individuals live in areas where they have no hope of ever finding another rhino.

"This is a fantastic gift for our uphill battle in ensuring the survival of this truly unique species and wonderful timing with Christmas, a time to give thanks for our blessings," said Laurentius Ambu the Director of the SWD.

"We have monitored her since 2007, and there is no sign that any other rhino has entered her range in the past five years," added Junaidi Payne the Executive Director of Borneo Rhino Alliance. "This is a stark indication that so few rhinos remain that they are simply not meeting for reproduction."

The rhino, named Puntung, was moved within Tabin Wildlife Reserve to be close to Tam, a middle-aged rhino rescued from an oil palm plantation in August 2008. Sumatran rhinos are critically endangered due to habitat destruction and poaching. Small populations live on the islands of Sumatra and Borneo -- but the number of Bornean rhinos remaining is less than 40.

Conservationists in Sabah are pushing a plan that would involve moving several rhinos to the Borneo Rhino Sanctuary, a large enclosed area covering 20 hectares of natural forest located within Tabin Wildlife Reserve. A similar program is underway in Sumatra.