Posted by archerzhh on Friday, 28 August 2015 in Water Conservation 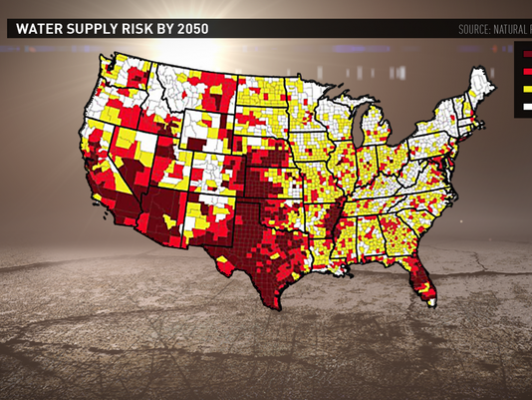 Nearly three-quarters of new Oregon residents come from western states, many of which are suffering from severe water shortages.

PORTLAND, Ore. – It’s no surprise that Oregon, especially Portland, is a hot destination for transplants from around the country. Anyone who sits in Portland’s increasingly worse traffic can attest to the fact there are more people on the roads.

Moving company United Van Lines even found that Oregon was the top moving destination in 2014.

We can look around and see the new faces, but how many people are actually moving to Oregon?

The number includes young transplants like chef Eric Gitenstein. He moved to Portland from Phoenix.

“I love the culture here, I like the walkability of Portland,” Gitenstein said.

It’s not just young people moving, either. Retirees Dean and Leena Mitchell moved to Milwaukie from Utah to take advantage of the new MAX Orange Line slated to open in September.

“One thing I’ve noticed compared to Salt Lake, there just seems to be a lot more public work going on,” Dean said.

Jurevich says the majority of transplants come from – you guessed it – California.

“Twenty-five to 30 percent of people who move to Oregon come from California,” Jurevich said. “That trend has been pretty consistent over the past five years.”

Given the drought in other Western states, the trend begs the question: Are people moving to Oregon for our relatively abundant water?

“I think we have anecdotal data and evidence that suggests increasingly people are thinking about climate with respect to moving to Oregon,” Jurevich said.

He has launched several research projects to explore that question even more.

Jurevich points out that Oregon is the closest state to many urban areas facing water shortages.

“I think a responsible approach for us in the region is to plan for that growth,” he said.

Nearly three-quarters of new Oregon residents come from western states, many of which are suffering from severe water shortages.