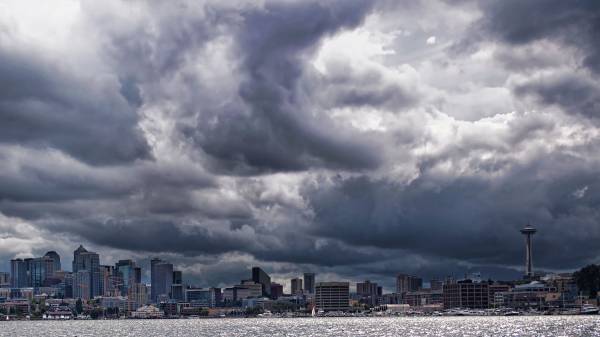 Hey, Seattle. Remember last winter? How pleasantly warm and dry it was, almost like you live somewhere reasonable and not in a pool of tepid water near Canada? Well, you’re paying for it now.

In a new article on Investigate West, reporter Robert McClure looks at the future of the city’s dwindling supply, and the results are Not Good. Representatives from Seattle Public Utilities showed McClure models based on simulations of future climate patterns, and the forecast is quite bleak. McClure writes:

Scientists have long predicted that climate change will cause the Northwest to receive more rain and less snow. Hotter, drier weather causes more evaporation — and increases water demand. The scenario that played out this year included all of that.

Almost all the future scenarios modeled by SPU showed big drops in what’s known in water-utility lingo as “firm yield”: the amount of water that can be reliably delivered. Even assuming a drastic cutback in the amount of greenhouse gasses being emitted today, Seattle is looking at reduced firm yield of an average of about 30 percent through 2050, according to three of these future climate simulations. …

“We are setting the stage for our decision makers to wrestle with this,” said Ray Hoffman, director of SPU. “This year, as tough as it is, is a real revelation for what the future might look like.”

This future could involve getting water from: Lake Youngs, which holds 11 billion gallons that could be used to make up for shortfalls. The problem, however, is that as the water level drops, mud banks could be exposed and “windstorms could wash mud into the water supply,” McClure writes. “The city might well have to build a new water-treatment plant to filter out the crud. The last cost estimate: $200 million to $250 million.”

SPU is exploring other ideas for how to deal with this looming crisis. There are other reservoirs the city could tap. Or they could desalinate Puget Sound, although that would be hugely expensive. The better solution is conservation. And Seattle is really pretty good at it, compared to most American cities. From McClure:

Seattleites’ now-legendary water conservation efforts were strengthened by a severe 1991 water shortage which led to water use restrictions, including the city’s first ban on lawn watering. The water cutbacks served as a wakeup call for the populace. SPU programs like giveaways of low-flow showerheads and a block rate pricing structure that encouraged conservation all helped reduce the region’s thirst. But one of the biggest long-term changes in water use came from the state outlawing the sale of inefficient toilets and faucets in the early 1990’s.

Seattle today is using about the same amount of water it was in the late 1950s — with double the population.

Read McClure’s piece for more detailed information on Seattle’s water supply. But here’s the takeaway: Don’t move here. It’s too expensive, the weather sucks, you never know when Macklemore is going to run into you with his moped, and it looks like we could be very thirsty sometime soon.