Posted by breenps on Sunday, 24 January 2016 in Water Conservation 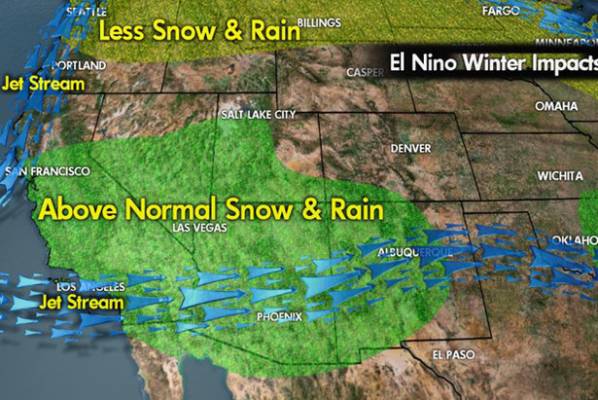 The Los Angeles River has once again come to life, supercharged with rainwater. Freeways have flooded. And California’s Sierra Nevada mountains — the so-called “snowy mountains” — are living up to their name.

This is all thanks to the huge ocean-atmosphere event Jet Propulsion Laboratory climatologist Bill Patzert is calling a “Godzilla El Niño.”

“There’s a lot of excitement. It’s been pretty sweet,” Patzert says. “This El Niño has been building for more than a year now, and ... it's finally come to fruition here in California where we did see a series of storms almost like a conveyor belt and we had our first really good soaking in almost five years.”

The big question a lot of people are asking is whether or not a “Godzilla El Niño” can solve the massive drought that has been crippling California for the past four years. After all, El Niño is affecting more than California. The entire southern tier of the United States from California to Florida has been blasted with a series of storms, and the northern tier of the US has been getting relatively milder, warmer weather.

“Mudslides in Los Angeles and golfing in Minneapolis,” Patzert jokes.

Up in the Sierra Nevadas, snow hydrologist Tom Painter has been measuring the snow pack and says more should be on the way.

“We're pretty confident,” Painter says, “Statistically, it should produce the big storms that we're hoping for, that will really make it leap up above average conditions ... usually our peak is around April 1, but this conveyor belt of storms can continue on out through the spring.”

Patzert, however, says that while El Nino is bringing a lot of much-needed water to the West Coast, it’s not going to put an end to the drought.

“This is what I call the down payment on a drought with a huge mortgage to pay off,” Patzert says. “Big El Niños only happen every 15 to 20 years. So when you look over the long haul, El Niños only supply about seven percent of our water supply, so it will take more than that to get us out of this punishing drought.”

“It can be towering amounts of snow and hugely beneficial for recharging the aquifers, for getting the ground water back toward where we need it,” Painter says. “But we've got a long way to go. We need a lot of precipitation to bring us back not only for the groundwater, but also for the the reservoirs and the ecosystems themselves. We've lost an enormous amount of the forests in the Sierra Nevada simply because of this ongoing drought and the intensity of that drought.”

Patzert says that, while the El Niño is exciting for drought-stricken California, people are going to have to get used to the idea that California’s water problems are a long-term issue that are going to take a long time to solve.

“The population in California has quadrupled in the last half century,” Patzert says, “Agriculture has expanded and a whole series of new industries have developed. So people forget that half of this drought is too many people using too much water in a semi-arid environment. But the good news is we've developed a lot of conservation habits here during this drought and people should not forget that is not temporary. That is the new lifestyle or we’ll be talking about drought forever.”

This article is based on an interview that aired on PRI's Science Friday.