Posted by Wolf on Sunday, 18 December 2011 in Ocean/Seas/Coastlines 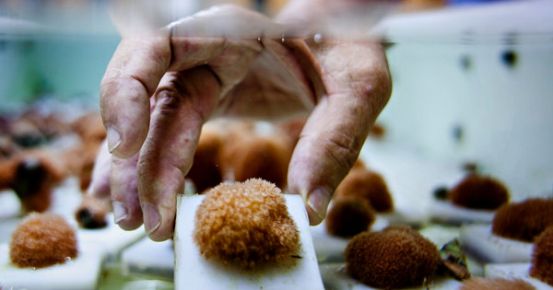 An ashy pallor has spread across South Florida's coral reefs over the past few months, as stressed corals expelled the algae that gives them color.

The worst case of coral bleaching since surveys began in 2005 struck reefs from the Florida Keys through Martin County, harming the base of the region's most biologically productive and economically important marine ecosystem.

A survey coordinated by The Nature Conservancy, involving 13 dive teams from government agencies, universities and non-profit groups, found that 21 to 50 percent of colonies checked in the Keys, Broward County, Biscayne Bay and Martin County had bleached or turned pale. Palm Beach County saw less bleaching, with three to 6 percent of colonies affected.

"It's really widespread," said James Byrne, Marine Science Program Manager for The Nature Conservancy. "We've seen it in past years in one or two areas, but we've never seen it across the whole reef."

Corals, tiny animals that build skeletons of calcium drawn from seawater, contain photosynthetic algae that provides them with energy and gives reefs their rainbow colors. When stressed, the corals expel the algae, making the corals more vulnerable to disease.

Often compared to tropical rainforests for their biological diversity, coral reefs provide habitat for a vast variety of fish, crustaceans, sponges and other sea creatures. The are a vital part of the South Florida tourist industry, supporting fishing, diving and snorkeling businesses.

It's too soon to know the impact, but scientists will be watching over the next few months to see if the coral recovers, Byrne said. They may well recover without damage, if no further stresses – such as severe cold this winter – cause additional bleaching, he said.

Bleaching has emerged as a worldwide threat, largely due to climate change, said Andrew Baker, associate professor of marine biology and fisheries at the University of Miami's Rosenstiel School of Marine and Atmospheric Science.

"The evidence is incontrovertible that the world is getting warmer," he said. "There is no doubt that we're seeing warmer than usual conditions at a much more regular rate than 30 years ago and that's causing coral bleaching."

Beginning with a mass bleaching in the eastern Pacific, he said, there have been several cases that wiped out vast stands of coral reef. The largest took place in 1997 and 1998, when the warming of the western Pacific killed up to one-sixth of the world's coral reefs.

"It's a huge problem, and we're seeing more of it," Baker said. "Coral bleaching is probably responsible for killing more coral worldwide than any other stressor, and it's all been in the last 30 years."

Chris Bergh, director of coastal and marine resilience for The Nature Conservancy, attributed the South Florida bleaching to a warmer climate.

"I don't think it's a coincidence that coral bleaching was so prevalent given that to date 2011 is tied for the tenth hottest year on record," he said. "This is troubling because this is a La Nina year and these are supposed to be cooler than normal here in South Florida."