Posted by breenps on Tuesday, 04 April 2017 in Transportation 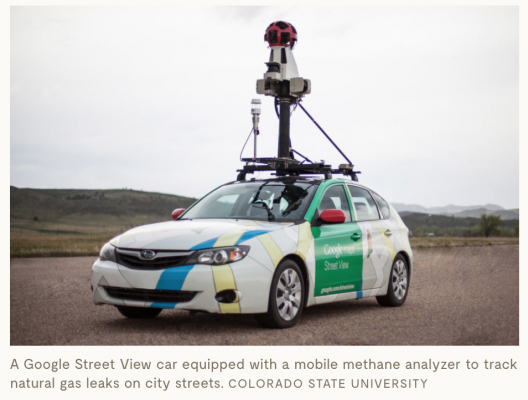 Google Street View cars have driven millions of miles across the globe, capturing 360-degree images of roadways and communities on all seven continents. Now, scientists and environmentalists are teaming up to add pollution trackers to the vehicles so they can monitor natural gas leaks as they drive.

The new project, detailed this week in the journal Environmental Science and Technology, is being led by researchers at Colorado State University, the Environmental Defense Fund, and Google Earth Outreach.

Methane, the main component of natural gas, is a powerful greenhouse gas many times more potent than carbon dioxide in the short-term. It is also leaking at high rates from aging urban pipe systems. Boston, for example, loses nearly 3 percent of its natural gas supply through cracked and faulty pipes each year, an estimated loss of $90 million. But until recently, collecting data on such leaks was costly and time-consuming, and utilities and communities rarely did it.

To address those problems, the researchers fixed mobile methane analyzers to Google Street View cars. The technology uses infrared lasers to detect methane leaks and calculate just how much gas is escaping in real time as the vehicles drive around collecting 360-degree images. So far, they’ve tested the technology in Indianapolis, Boston, Staten Island, Syracuse, and Burlington, Vt. Burlington and Indianapolis, which have newer pipe infrastructure, had fewer than a dozen leaks each, averaging less than six per 100 kilometers. Boston, Staten Island, and Syracuse, on the other hand, had thousands of leaks each, averaging 56, 63, and 28 leaks per 100 kilometers, respectively, the scientists reported in their new study.

“This is a huge challenge that almost nobody had been thinking about,” project leader Joe von Fischer, an ecosystem ecologist at Colorado State University, said in a statement. “Now we’re finding out just how widespread these leaks are. The faster you fix them, the bigger the environmental benefits are. But utilities and regulators didn’t have the data to focus their efforts. That’s where we come in.”