Posted by acox on Wednesday, 24 October 2012 in Biofuels

Algae Biofuels Could Bloom by 2015 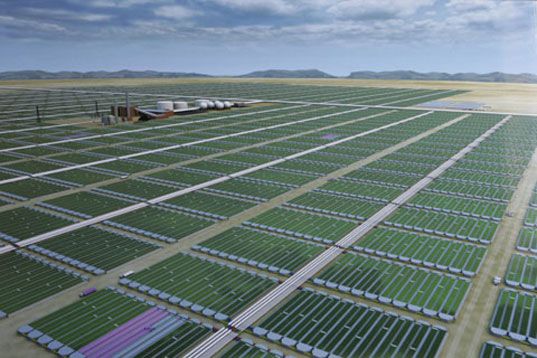 Algae biofuels could bloom into a $1.6 billion industry by 2015, according to a recent report by energy research firm SBI.

As pondscum fuels make the jump from test tube to tanker trucks, the growing industry is lobbying Congress to make sure it has a level playing field when it arrives at commercial scale.

The Algae Biomass Organization (ABO) is celebrating a small victoryearlier this month, when the Senate Finance Committee approved a billthat would extend a cellulosic biofuel tax credit to include algae fuels.

“When you start putting language into tax code legislation, it really legitimizes the feedstock and it legitimizes the technology,” said Mary Rosenthal, ABO’s executive director.

Congress created the $1.01 per gallon production tax credit for cellulosic biofuels in 2005, when algae biofuels were still in a “very nascent stage,” Rosenthal said. The ABO has been lobbying Congress for the past few years to extend the credit to include algae.

“Our position is for legislation to be written so that it’s technology-neutral and feedstock-agnostic,” she said.

Algae’s exclusion from the original bill hasn’t hurt the algae industry yet because it hasn’t reached the stage of commercial-scale production. But researchers are getting closer. Rosenthal estimated that up to 200 companies would benefit from the expanded tax credit.

The Senate isn’t expected to take up the bill until it reconvenes next month, and with election-year politics in play, it’s anyone’s guess whether the full Senate or House will back the provision. Rosenthal said the White House supports it.

Even if it doesn’t become law this year, it’s passage in the Senate committee is still an important milestone that sends a positive signal to the financial world, Rosenthal said.

Thomas Byrne, CEO and president of Algaedyne in Preston, Minnesota, said the bill’s potential impact on investor attitude will probably outweigh the tax benefit for his company.

“If the government comes and shows its support long-term for it, it’s easier for us to get investors,” Byrne said. Algaedyne is on track to commercialize its product in about a year, he said.

Algaedyne is working closely with St. Cloud State University, which will host an ABO event todayas part of the trade group’s “Summer of Algae” campaign.