Posted by hzicko on Thursday, 15 June 2017 in Fossil Fuels 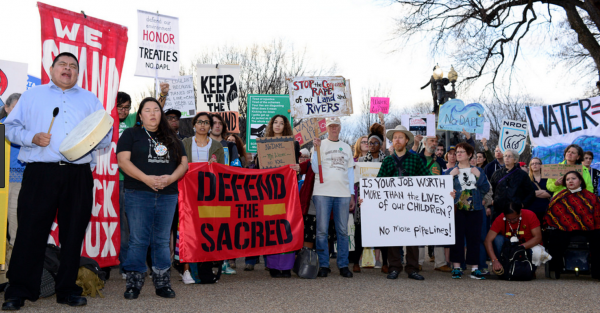 A federal judge has handed a lifeline to efforts to block the Dakota Access pipeline, ruling Wednesday that the US Army Corps of Engineers did not adequately consider the possible impacts of an oil spill where the pipeline passes under the Missouri river.

US district judge James Boasberg said in a 91-page decision that the corps failed to take into account how a spill might affect “fishing rights, hunting rights, or environmental justice, or the degree to which the pipeline’s effects are likely to be highly controversial”.

The judge said the army must redo its environmental analysis in certain sections and he would consider later whether the pipeline must halt operations in the meantime. A status conference is scheduled for next week.

Dave Archambault II, chairman of the Standing Rock Sioux tribe, which has led opposition to the pipeline, called it “a significant victory”.

The pipeline developer Energy Transfer Partners (ETP) announced earlier this month that it started shipping oil to customers. ETP maintains that the 1,200-mile pipeline is safe, but the Standing Rock Cheyenne River, Yankton and Oglala Sioux tribes in the Dakotas fear environmental harm.

ETP spokeswoman Vicki Granado did not immediately return email and phone messages seeking comment on Boasberg’s ruling. A spokeswoman for the US Department of Justice, Nicole Navas Oxman, said the department was reviewing the ruling.

The decision marks “an important turning point”, said Jan Hasselman, attorney for the non-profit Earthjustice, which is representing the tribes in the lawsuit.

“Until now, the rights of the Standing Rock Sioux tribe have been disregarded by builders of the Dakota Access pipeline and the Trump administration ... prompting a well-deserved global outcry,” Hasselman said.

The project led to months of demonstrations near the Standing Rock reservation and hundreds of protesters were arrested. The protests died off with the clearing of the main encampment in February and the completion of the pipeline.

Boasberg rejected two earlier complaints by the tribes. One was that the construction threatened sites of cultural and historical significance and the other was that the presence of oil in the pipeline under Lake Oahe would desecrate sacred waters and make it impossible for the tribes to freely exercise their religious beliefs.

“Now that the court has rejected these two lines of attack, Standing Rock and Cheyenne River here take their third shot, this time zeroing in DAPL’s environmental impact,” Boasberg wrote. He added later, “This volley meets with some degree of success.”

The corps originally declined to issue an easement for drilling and earlier this year launched a full environmental study of the Lake Oahe crossing, which it said would take up to two years to complete. Boasberg, the federal judge, had rejected an ETP request to stop the study.

“As we all know, elections have consequences, and the government’s position on the easement shifted significantly once President Trump assumed office on January 20, 2017,” Boasberg wrote in Wednesday’s ruling.