Posted by amir on Wednesday, 26 September 2012 in Air Quality 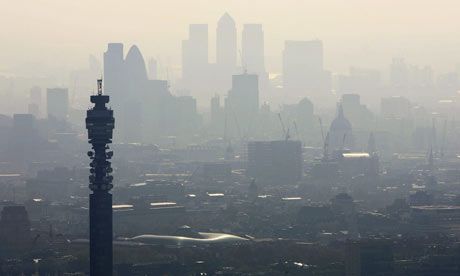 The largest and most comprehensive effort to research air pollution in Britain is underway in London and the skies above it.

As many as 80 scientists from eleven universities are tracking nearly 1,000 different types of gases and particles in the atmosphere.

Pollutants are being measured on the ground, at the top of BT Tower and from a research plane circling the capital.

The project is timed to provide reams of data during the Olympic Games.

It is also intended to help improve air quality forecasting in the years ahead.

One aim is to investigate how much pollution is generated by the capital itself - principally from vehicles - and how much blows in from the industrial centres of continental Europe.

London is frequently in breach of international air quality standards set by the EU and World Health Organisation.

In the two days before the Opening Ceremony of the Games, levels of ozone soared well above the WHO's recommended safe limit of 60 parts per billion over an eight-hour period.

More recently, with cooler and windier weather conditions, pollution levels have been low.

Ozone and other gases such as nitrogen dioxide, together with microscopic particulates, are known to cause a range of damaging health effects, especially respiratory problems.

The project is known as ClearFlo and one of the scientists leading it, Dr James Lee of the University of York, told the BBC that the air contained a "complex cocktail" of chemicals.

"We're trying to find out how pollutants are formed. A lot of the major ones that affect human health are not emitted directly from the backs of vehicles," he said.

"Instead they are formed by a complicated series of reactions that are triggered by sunlight and go on to form other chemicals." 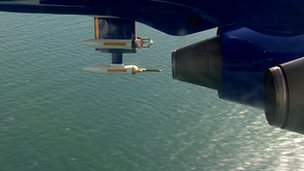 Dr Lee's own research is focused on the precise role played by a short-lived "radical" known as hydroxyl.

Hydroxyl is produced when sunlight hits ozone, at which point it then acts as a catalyst to generate another pollutant, nitrogen dioxide.

The chemical is one of hundreds being monitored by an array of scientific instruments set up in the playground of a school in North Kensington.

The site was picked because the air is typical for a residential area, being 'well-mixed' and not in the middle of a pollution hot-spot.

It is also beside long-term monitoring devices run by King's College London so readings can be compared.

Dr Lee said: "We want to try to understand how the pollutants are formed so we can produce better forecasts of when air quality will be poor.

"The point of that is so that we can advise on the best strategies for abatement in the future." 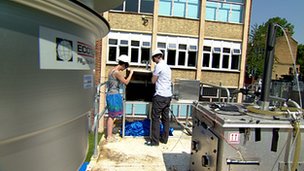 Scientists measure ground-level pollution from a school in Kensington

The instruments are fitted to a mix of shipping containers, vehicles and trailers and are designed to be easily shipped around the world.

Many of these sets of monitoring devices have been deployed to some of the cleanest parts of the planet - Tasmania, the Cape Verde islands and even Antarctica.

So the researchers have a detailed picture of what unpolluted air looks like - and what they are finding in London is very different.

The ground-level measurements are being gathered alongside with data from instruments at the top of the BT Tower - and from Britain's largest atmospheric research plane.

The same aircraft has been used to fly through weather systems including storms - and I reported from it in May.

Now its instruments, fitted to the fuselage and wings, are harvesting samples of contaminated air for realtime analysis and more detailed study on the ground.

The goal is to create a three-dimensional image of the pollution - what's known as the "London plume", a manmade cloud that rises above the capital and then drifts away with the wind.

A key question for London is the source of the pollution. The city's traffic, heating boilers and domestic cookers contaminate the atmosphere but pollution is also occasionally carried over London from the industrial heartlands of northwest Europe.

The flight I joined took off from Cranfield near Bedford, flew over Portsmouth and then skimmed along the English Channel and North Sea coast up to the Wash - sometimes just 50ft above the waves.

The aircraft provides the only feasible way of gathering data at different altitudes.

It was a bizarre sight flying so low over the sea that the plane was lower than the tops of the white cliffs of Dover - and virtually beside giant tankers and a cross-Channel ferry.

Dr Grant Allen of the University of Manchester, on board the flight, explained the point of flying circuits so far from London.

"The idea is to measure the air that's coming off the sea and into London, and the air that comes out the other side. 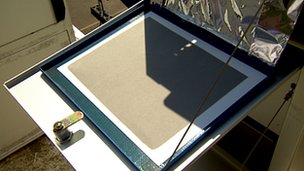 "That allows us to tell what's happening in the middle - what's being added to the air as it passes over London."

The issue is of more than academic interest. London is repeatedly in breach of EU limits on air quality so identifying the source of pollution matters.

Dr Allen said: "Last year London broke the limits over 30 days of the year - that's very significant and we have to pay fines to the EU.

"So part of this project is to assess whether we're breaking those limits because of the pollution generated in London itself or whether it's pollution that might be coming into the UK from the Continent."

During spells of high pressure, the movement of air tends to come from the East so any pollution from major cities or industrial areas in France and Germany could head our way.

So far the Olympic Games have passed without any pollution problems. Changeable conditions and occasional rain tend to disperse any contaminants.

But if the temperatures rise and the sun comes out - exactly what most people look forward to - the circumstances will be ideal for a build-up of pollution.

For people with respiratory problems, and chronic conditions like asthma, having an accurate forecast could prove extremely useful.

Dr Janet Barlow of the University of Reading, an urban meteorologist, hopes to use the data to enhance the current models for air quality.

"If you think about the sunshine, it's just like turning up the gas on a pot of chemical soup such that the soup starts bubbling up," she said.

"Sunlight can drive some of the chemical reactions that create things like ozone and if you imagine walking around in a hot urban environment, and being exposed to ozone as well, it can have a really bad impact on your health."

The ClearFlo project is funded by the Natural Environment Research Council (Nerc) and is coordinated by the National Centre for Atmospheric Science. The research aircraft is jointly owned by Nerc and the UK Met Office, the latter supporting the project's flights.