Posted by Rapanuiclothing on Monday, 05 March 2018 in Climate Change 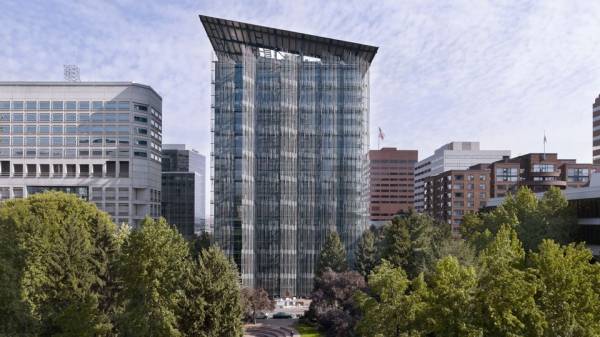 Being close to nature is good for wellbeing, while vegetation is vital for curbing climate change, scientists say

BARCELONA, March 5 (Thomson Reuters Foundation) - In a square in central Barcelona, families with young children perch at picnic tables as traffic thunders past and high-rise blocks loom above them.

But the concrete mecca that is Plaça de les Glòries Catalanes is about to undergo a major facelift that will create a new green public space for Spain's second-largest city.

Starting this month, two underground tunnels will be built, funnelling traffic away from the square, Marta Pigem Jubany, a spokeswoman for Barcelona City Hall, told the Thomson Reuters Foundation.

Subsequently a new park will be constructed, including a lawn and children's play area, an outdoor market, exotic gardens, water features and a performing arts space.

In the city best known among tourists for its Las Ramblas shopping street, the regenerated zone will also feature a tree-lined avenue called the Rambla dels Encants (Boulevard of Charms).

It is not the only new park planned for Barcelona. In the north of the city, a 7.6 million-euro ($9.4 million) project begins in May to transform the grounds of a dilapidated early 20th century estate, known as Finca Ravetllat-Pla, into another green space.

Cities are increasingly looking for ways to provide more greenery, as migration to urban areas rises and a growing body of scientific evidence indicates that being close to nature is good for people.

Vegetation also sucks up planet-warming carbon dioxide, and is key to efforts to combat climate change.

Some 750 climate scientists and urban planners are gathered in Canada this week at a U.N.-hosted conference to discuss how to help cities reduce their greenhouse gas emissions and become more resilient to extreme weather and rising seas.

The proportion of the global population living in urban areas has risen from half in 2000 to 55 percent now, and is predicted to reach two-thirds by 2050.

"Access to nature provides an array of health and wellbeing benefits, from the psychological and physical to the social," said Kevin J. Gaston, a professor of biodiversity and conservation at Britain's University of Exeter.

"Particularly in westernised societies, we are becoming aware of a whole array of quite chronic health consequences associated with city living - for instance, obesity, mental illness, diabetes," he told the Thomson Reuters Foundation.

A green roof, for example, not only makes the landscape look more attractive, but also provides insulation, cutting back on energy usage, said Collier, who leads a Europe-wide research project called Connecting Nature.

Green spaces can help combat rising heat levels, provide a buffer against flooding and intercept dust, toxins and noise, according to the Connecting Nature website.

But some benefits are harder to quantify, such as a fall in hospital stays and lower blood pressure, Collier noted.

The 11.4 million-euro project, which began last year and runs until 2022, is developing "nature-based solutions", such as street trees, parks, and green roofs and walls, across 11 European cities.

There are plans to replicate the project, funded by the European Commission, in China, Brazil, South Korea and the Caucasus.

European cities present a unique challenge because they are dense, and often in need of more residential housing – meaning urban planners who want to prioritise nature must compete for space.

The prevalence of old buildings in European cities can also cause complications, because green projects have to be retrofitted to them, noted Collier.

As many of those projects are relatively untested, finding finance for them and devising metrics to assess their performance are additional challenges, he said.

Partnerships with local authorities, industry and non-governmental groups are essential for the Connecting Nature project in Europe, but could be more difficult to achieve in other places, Collier said.

"Collaboration is very much the cornerstone of the European project, but in China community participation is not as common," he added.

Few would disagree that greenery makes cities prettier and more liveable, yet experts warn its deeper effects may take some time to show.

"Nature can't be a 100 percent cure for all ills... No one is claiming that you take someone for a walk in the park and tomorrow they will be thinner, or less stressed," said Gaston.

"A lot of what we're talking about here are benefits that play out over life spans rather than ones that are maximised by tomorrow," he added.

Short, frequent experiences are probably more significant than total immersion in nature, meaning cities should look for ways of incorporating green space into their layout, he noted.

"We have to get very creative about it and take opportunities when bits of land do become available to think about the longer-term benefits they might provide rather than just putting a new building in their place," he said.

Experts also warn that providing more nature in cities can raise rents, pricing out some residents.

"There's always a threat of social displacement – especially in any kind of neighbourhood that is already experiencing gentrification pressures," said Daniel Aldana Cohen, an assistant professor in sociology at the University of Pennsylvania.

One solution is to roll out small green projects across a city, rather than focus on high-profile, flashier initiatives in just a few neighbourhoods, he said.

Providing rail and bus links to green spaces outside a city is another way to help people access nature in a low-carbon way, he added.

"You see this in Japan, which has great rail linkages and has made a real effort to have a green belt with accessible mountains," he said.

The Thomson Reuters Foundation is reporting on resilience as part of its work on zilient.org, an online platform building a global network of people interested in resilience, in partnership with the Rockefeller Foundation.