Posted by Eastherjames on Friday, 19 October 2018 in Animals 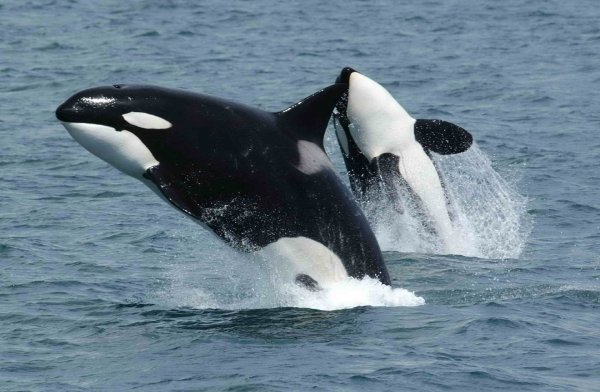 Killer whales in the South Atlantic Ocean are willing to dive more than a thousand feet more than previously recorded—if they are certain to get a snack at the end of it, researchers have discovered. And the best way to guarantee food is to steal it.

BC-based marine researcher Jared Towers witnessed a tagged killer whale diving 3,566 feet to snag some toothfish off a long commercial fishing line. More than 60 killer whales and 40 sperm whales were studied, though just one of each was tagged because whales aren’t particularly cooperative, said Towers.

"We had no idea they were physiologically capable of diving this deep. This depth record destroys all others for the species,” said Towers, who detailed his team’s findings in a new paper published last month in the journal ICES Journal of Marine Science.

Towers travelled to the frigid, choppy waters surrounding South Georgia and the South Sandwich Islands to learn more about what killer and sperm whales are willing to do to eat.

Killer whales, depending on size, can eat between 200-400 pounds of fish a day. They also often share food with their kin. Toothfish in the south Atlantic are a particularly energy-dense and highly desirable food for whales of all types.

Towers told me by phone that researchers witnessed killer and sperm whales competing to steal fish from the longlines, and in some cases the whales even acted aggressively while competing for food.

“Considering fishing is usually stopped when killer whales show up to steal fish, we hypothesize that their extreme behaviours are driven by the limited availability of the energy rich toothfish resource,” Towers said.

Sperm whales are normally able to dive deeper than killer whales, he added, especially when they’re in the business of catching prey: “The sperm whale goes deeper, faster and longer when it was stealing fish compared to when it wasn’t.”

The fact that the killer whales—which aren’t really known for ultra-deep dives—were also setting new dive records could be a byproduct of this competition, he explained. The killer whales observed for this study dove quickly and then had to spend hours recovering. One whale spent four hours at the surface trying to fight off the bends. “They’ll do anything for food, if the food is the right kind,” said Towers.

Fisheries may be aghast at the discovery. Typically they set out longlines, measuring 2.5-7.5 miles in length with hooks every 10 feet or so, to haul in multiple fish at once.

Clearly the whales understood how the fishing boats worked; whales were observed following ships for up to 200 miles before making their move on the toothfish.

These new diving behaviors are impressive, yet also a cause for concern.The whales could easily get a hook in the mouth or get wrapped in the line. Worse, they could also become dependent on human fishing as a way to get food.

“Fisheries are volatile. If the fishery collapses, the whale suffers too,” said Towers.

He noted that the whales’ habits might encourage fisheries to develop new techniques to prevent their thieving, which could potentially endanger the animals.

Still, at least for the time being, the killer whales appear to be getting fish-rich off of human activities in the ocean. Godspeed, Willy.