Posted by GreenDog on Friday, 26 March 2021 in Wildlife Conservation
Featured 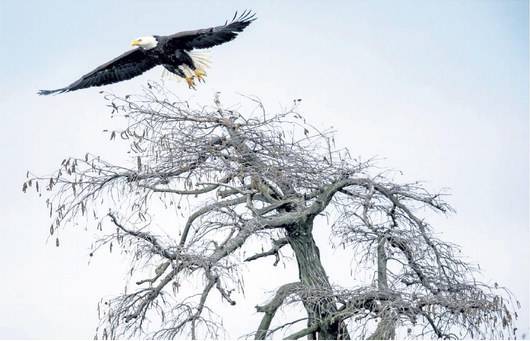 The bald eagle population in the lower 48 states has quadrupled since 2009, researchers said this week, underscoring decades of efforts to protect a species that was once on the brink of extinction.

There were an estimated 316,700 bald eagles in the lower 48 states during the 2019 breeding season, including more than 71,400 breeding pairs, according to a report issued Wednesday by the U.S. Fish and Wildlife Service.

Interior Secretary Deb Haaland said at a news conference Wednesday that the results were “truly a historic conservation success story.”

“The bald eagle has always been considered a sacred species to American Indian people,” said Haaland, the first Native American to lead a Cabinet agency. “Similarly, it’s sacred to our nation as America’s national symbol.”

Martha Williams, a deputy director at the Fish and Wildlife Service, said in a statement that her organization would keep working with state and federal agencies, tribes, private landowners and others to ensure that the bald eagle population continues to increase.

Bryan Watts, a biology professor and the director of the Center for Conservation Biology at William & Mary, said Thursday that the report reflected what he had seen in the Chesapeake Bay region, where the bald eagle population had been growing about 8% to 10% per year.

Researchers were able to include younger eagles and floaters — mature eagles that were unable to secure breeding territories — in the population estimate that was released Wednesday, which they said they had not been able to do as effectively in previous studies.

The numbers are particularly remarkable given that the species was nearly driven to extinction in the past century.

In 1917, bald eagles were considered a menace in Alaska. The government sponsored a bounty of 50 cents a bird, and later a dollar, leading to more than 120,000 confirmed killings. By the mid-20th century, all but a few hundred bald eagles were presumed dead, killed off largely by widespread use of the synthetic insecticide DDT. The bald eagle population reached its lowest point of 417 known nesting pairs in 1963, researchers said.

But through protection and conservation efforts and the banning of DDT in 1972, the population was able to recover over the years. The bald eagle was removed from Endangered Species Act protection in 2007.

While many celebrated the increase in numbers, bald eagles in recent years have become a nuisance for poultry farmers hoping to raise a full, healthy stock, prompting many to apply for an eagle-depredation permit from the Fish and Wildlife