Posted by GreenDog on Friday, 21 May 2021 in Environmental Heroes
Featured 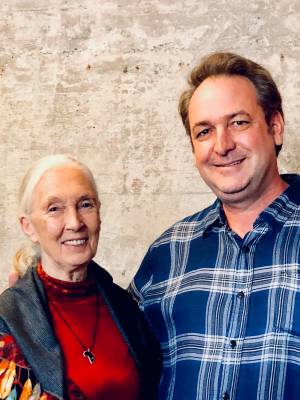 Jane Goodall, the conservationist renowned for her expertise on chimpanzees and her globe-spanning advocacy of environmental causes, was named Thursday as this year’s winner of the prestigious Templeton Prize, honoring individuals whose life’s work embodies a fusion of science and spirituality.

Goodall, born in London in 1934, traveled to Kenya in 1957 and met the famed anthropologist and paleontologist Louis Leakey. In 1960, at his invitation, she began her groundbreaking study of chimpanzees in what is now Tanzania.

Her field research revolutionized the field of primatology, helping transform how scientists and the public perceive the emotional and social complexity of animals. She was the first to observe that chimpanzees engage in activities previously believed to be exclusive to humans, such as creating tools, and she demonstrated that they have individual personalities.

“Her discoveries have profoundly altered the world’s view of animal intelligence and enriched our understanding of humanity in a way that is both humbling and exalting,” said Heather Templeton Dill, president of the John Templeton Foundation, which helps administers the prize.

Established in 1972 by the late philanthropist Sir John Templeton, the prize is one of the world’s largest individual awards — currently valued at $1.56 million.

Past winners include Mother Teresa, the Dalai Lama and Archbishop Desmond Tutu of South Africa.

Last year’s honoree was Dr. Francis Collins, director of the National Institutes of Health in the United States and leader of the Human Genome Project.

Goodall, in an interview with The Associated Press before the award’s announcement, recalled how her work with the chimpanzees led to a broader appreciation for nature as she spent hours by herself in the forest.

“Out there in nature by myself, when you’re alone, you can become part of nature and your humanity doesn’t get in the way,” she said.

As her fame grew, she expanded into a diverse range of activities, including humanitarian initiatives and advocacy for the ethical treatment of animals.