Posted by Wolf on Wednesday, 09 November 2011 in Animals

From Lowlands of the Congo to the Local Zoo 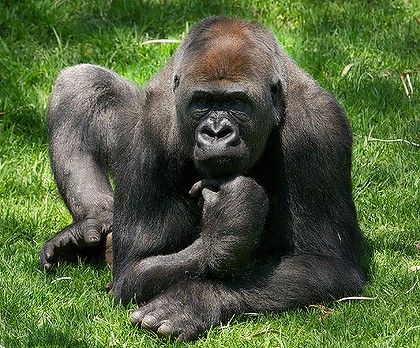 The trio were relocated from Melbourne Zoo to one of the largest gorilla homes in the world and, in the coming years, more male gorillas may move in.

"It has the capacity to hold up to six mature male gorillas very comfortably," said Werribee Zoo director Sally Lewis.

The $3.6 million exhibit will play a part in the continuation of regional and international gorilla breeding. Motaba has already fathered five offspring and is unlikely to be called on for breeding in the future, but Yakini and Ganyeka may be selected. All three were born in captivity.

Kat Thompson and fellow keepers Kylie Lihou and Kathy Scanlon worked with Melbourne Zoo over the past year to help the gorillas adjust to their new life at Werribee. While all three trainers can work with the gorillas, each keeper has paired up with one of "the boys".

"I got the handsome one," Ms Thompson said, referring to Yakini.

Ms Lihou works with Ganyeka, who spent most of his first public day sitting near the glass viewing station observing groups of school children.

Now that the boys have been in Werribee for almost two weeks, the keepers are working on settling them in to their new home.

"The focus now is on getting them into a routine," Ms Scanlon said.

The "Gorillas Calling" exhibit is part of Zoos Victoria's mobile phone recycling campaign "They're Calling on You." The effort focuses on reducing the illegal mining of coltan, a rare metal found in many electronic devices. Mining in the Congo River Basin has caused deforestation and is accelerating the loss of endangered gorillas.

"We want to get people to connect with them and understand the habitat destruction happening," Ms Thompson said.