Posted by GreenDog on Monday, 06 December 2021 in Fossil Fuels
Featured 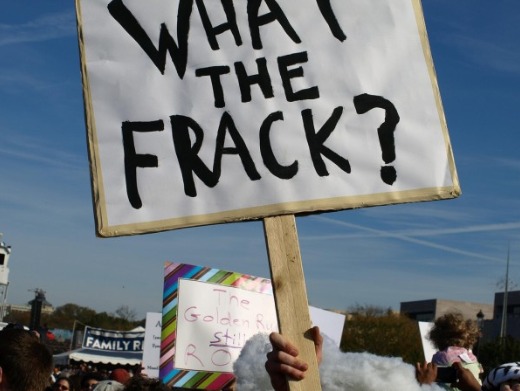 By Cathy Bussewitz and Martha Irvine

ARLINGTON, TEXAS » At a playground outside a North Texas day care, giggling preschoolers chase each other into a playhouse. Toddlers scoot by on tricycles.

Just uphill, Total Energies is pumping for natural gas. The French energy giant wants to drill three new wells on the property next to Mother’s Heart Learning Center, which serves mainly Black and Latino children. The wells would lie about 600 feet from where the children play.

The prospect is raising fears among families and the surrounding community. Living too close to drilling sites has been linked to a range of health risks from asthma to neurological and developmental disorders. And although some states require energy companies to drill farther from day cares and homes, Texas has made it difficult for localities to fight back.

On Tuesday night, the Arlington City Council voted 5-4 to approve Total’s latest drilling request, with expected final approval in the weeks to come. Last year, the council denied Total’s request at a time when Black Lives Matter protests after George Floyd’s murder by police led many American communities to take a deeper look at racial disparities. But with some turnover on the City Council, many residents worried Total would succeed this time.

“I’m trying to protect my little one,” said Guerda Philemond, whose 2-year-old daughter attends the day care. “There’s a lot of land, empty space they can drill. It doesn’t have to be in the backyard of a day care.”

Total declined a request for an interview, but in a statement it said it has operated near Mother’s Heart for more than a decade without any safety concerns expressed by the city.

“We listen to and do understand the concerns of the local communities with whom we interact frequently to ensure we operate in harmony with them and the local authorities,” the statement said.

The clash in Arlington comes as world leaders pledge to burn less fossil fuel and transition to cleaner energy. Yet the world’s reliance on natural gas is growing, not declining.

As a result, there likely will be more drilling in Arlington and other communities. And children who spend time near drilling sites or natural gas distribution centers — in neighborhoods that critics call “sacrifice zones” — may face a growing risk of developing neurological or learning problems.

Many of the wells Total has drilled in Arlington are near Latino and Black or lowincome communities, often just a few hundred feet from homes. A statistical analysis by The Associated Press of the locations of wells Total operates in Arlington shows that their density is higher in neighborhoods that many people of color call home.

Asked about that finding, Total did not respond directly but said its “decisions on future drilling are driven by the geological data.”

“America is segregated, and so is pollution,” said Robert Bullard, director of the Bullard Center for Environmental and Climate Justice at Texas Southern University. “The dirty industries, and what planners call locally unwanted land uses, often times followed the path of least resistance. Historically, that’s been poor communities and communities of color.”

At the day care, owner Wanda Vincent has been gathering signatures to petition the City Council to reject Total’s drilling request. She worries that the political winds in Arlington have shifted and the council will approve Total’s new request.

“The world was dealing with what happened with George Floyd,” she said. “The meeting was emotional, just listening to the speakers that were talking and then sharing their hearts and saying, ‘Well, we want to do more. We want to, you know, racially do better.’ And I was encouraged. But you know what? Nothing has really changed since then.”

Some states have acted to force fracking away from residents. Colorado last year required new wells to be drilled at least 2,000 feet from homes and schools. California has proposed a limit of 3,200 feet.

In Arlington, drilling is supposed to occur no closer than 600 feet from day care centers or homes. But companies can apply for a waiver from the City Council to drill as close as 300 feet.

France, Total’s home country, bans fracking, but it’s largely symbolic because no meaningful oil or gas supplies exist there. So Total, one of the world’s largest players in natural gas, drills in 27 other countries. It turns much of that gas into liquid, ships it, trades it, and re-gasifies it at LNG terminals worldwide.

The gas wells next to Mother’s Heart represent a tiny fraction of Total’s global operations. Yet the company holds tight to its plans to drill there despite the community’s resistance.

In Arlington, companies that are rejected for a drilling permit may reapply after a year. Some Arlington council members have said they fear litigation if they don’t allow the drilling, be-cause a Texas law bars lo calities from banning, limiting or even regulating oil or gas operations except in limited circumstances.

“Nobody should have a production ban unless they have a consumption ban, because it has made places like Arlington extraction colonies for countries like France, and they have shifted the environmental toll, the human toll, to us,” said Ranjana Bhandari, director of Liveable Arlington, the group leading the opposition to Total’s drilling plans.

Total has drilled closer to population centers in the Barnett Shale than have other companies over the past eight years, according to S&P Global Platts.

Some have benefited from drilling. “It’s enabled us to do ministries that we might not have been able to do,” said Jan Porter, a former elder at Cornerstone Baptist Church, which collects royalties by allowing Total to drill on its land.