Posted by GreenDog on Tuesday, 23 August 2022 in Animals

Chimps catch insects to put on wounds. Is it folk medicine? 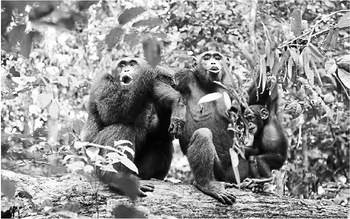 Chimpanzees design and use tools. That is well known. But is it possible that they also use medicines to treat their own and others’ injuries? A new report suggests they do.

Since 2005, researchers have been studying a community of 45 chimpanzees in the Loango National Park in Gabon, on the west coast of Africa. Over a period of 15 months, from November 2019 to February 2021, the researchers saw 76 open wounds on 22 chimpanzees. In 19 instances they watched a chimp performing what looked like self-treatment of the wound using an insect as a salve. In a few instances, one chimp appeared to treat another. The scientists published their observations in a recent issue of the journal Current Biology.

The procedure was similar each time. First, the chimps caught a flying insect; then they immobilized it by squeezing it between their lips. They placed the insect on the wound, moving it around with their fingertips. Finally, they took the insect out, using either their mouths or their fingers. Often, they put the insect in the wound and took it out several times.

The researchers do not know what insect the chimps were using, or precisely how it may help heal a wound. They do know that the bugs are small flying insects, dark in color. There’s no evidence that the chimps are eating the insects — they are definitely squeezing them with their lips and then applying them to the wounds.

There have been other reports of self-medication in animals, including dogs and cats that eat grass or plants, probably to help them vomit, and bears and deer that consume medicinal plants, apparently to self-medicate. Orangutans have been seen applying plant material to soothe muscle injuries. But the researchers know of no previous report of nonhuman mammals using insects for a medicinal purpose.

In three instances, the researchers saw chimps using the technique on another chimp. In one case, they saw an adult female named Carol grooming around a flesh wound on the leg of an adult male, Littlegrey. She grabbed an insect, and gave it to Littlegrey, who put it between his lips, and transferred it to his wound. Later, Carol and another adult male were seen moving the insect around on Littlegrey’s wound. Another adult male approached, took the insect out of the wound, put it between his own lips, then reapplied it to Littlegrey’s leg.

One chimp, an adult male named Freddy, was a particularly enthusiastic user of insect medicine, treating himself numerous times for injuries of his head, both arms, his lower back, his left wrist and his penis. One day, the researchers watched him treat himself twice for the same arm wound. The researchers don’t know how Freddy got these injuries, but some of them probably involved fighting with other males.

There are some animals that cooperate with others in similar ways, said Simone Pika, who leads an animal cognition lab at the University of Osnabrück in Germany and is an author of the study. “But we don’t know of any other instances in mammals,” she said. “This may be a learned behavior that exists only in this group. We don’t know if our chimps are special in this regard.”

Aaron Sandel, an anthropologist at the University of Texas at Austin, found the work valuable, but at the same time expressed some doubts. “They don’t offer an alternative explanation for the behavior, and they make no connection to what insect it might be,” he said. “The jump to a potential medical function? That’s a stretch at this point.”

Still, he said, “attending to their own wounds or the wounds of others using a tool, another object — that’s very rare.” Their documentation of chimps paying such attention to other chimps is, he added, “an important contribution to the study of social behavior in apes. And it’s still interesting to ask whether there is empathy involved in this, as it is in humans.”

In some forms of ape social behavior, it is clear that there is an exchange of value. For example, grooming another chimp provides relief from parasites for the groomed animal, but also an insect snack for the groomer. But in the instances she observed, Pika said, the chimp gets nothing tangible in return. To her, this shows the apes are engaging in an act that increases “the welfare of another being,” and teaches us more about the primates’ social relationships.

“With every field site we learn more about chimps,” she said. “They really surprise us.”