Posted by davebishop on Tuesday, 23 October 2012 in Solar 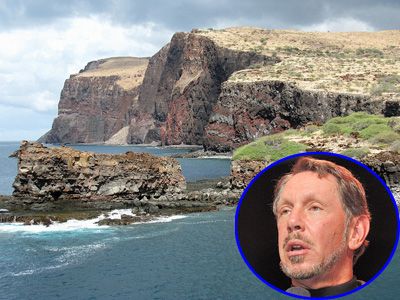 What would you do if you had your own tropical island in the middle of paradise? If you’re Oracle CEO Larry Ellison, you’d turn it into a haven for sustainable technology.  Four months ago, the billionaire bought 98% of the Hawaiian island of Lanai for $500 million. In a recent interview with Maria Bartiromo of CNBC, he detailed his vision for his new acquisition, including generating the island’s electricity from solar thermal and photovoltaic cells, organic farms, and desalinization plants.

Larry Ellison has a dream for the island of Lanai.  The billionaire, who owns the island’s water and electric utilities as well as a majority of its land, hopes to create a model for sustainable culture. In addition to producing electricity from solar technology and obtaining fresh water from a thermal-powered desalinization plant, Ellison also envisions an island filled with electric vehicles and organic farms.

“We have drip irrigation where we are going to have organic farms all over the island. Hopefully we are going to export produce — really the best, organic produce to Japan and elsewhere,” he told Maria Bartiromo of CNBC. “We are going to support the local people and help them start these businesses. We will have electric cars. So it’s going to be a little, if you will, laboratory for sustainability in businesses of small scale.”

Ellison has yet to propose his plans to the island’s 3,000 residents, and some feel as though his current top-down, almost colonial approach to urban planning may run him into trouble. It’s undoubtedly an ambitious plan, and it may take more than just money and good intentions to rework the infrastructure of Lanai. Still, the project has incredible potential to serve as a model for large-scale, environmentally conscious planning. We can’t help but be captivated by Ellison’s ideas, and we look forward to following Lanai’s development into the future.