Record summer temperatures, farm fertilizers and a lack of wind have created a gigantic carpet of evil-smelling weed covering large areas of the Baltic and threatening both marine life and seaside tourism, scientists warn.

The 377,000 sq km of blue-green algae, covering an area the size of Germany, has been identified by satellite cameras. It extends from Finland along the south coast of Sweden and surrounds the Danish island of Bornholm. 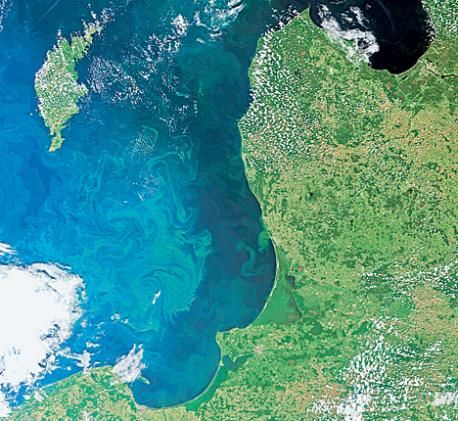 Scientists from the German section of the World Wide Fund for Nature in Hamburg have warned of the damaging effects of the weed. "These huge algae carpets hit the marine environment most," said Jochen Lamp, a WWF project spokesman. "They kill plants and encourage the spread of dead zones on the sea bed which have no oxygen left in them."
Blue-green algae, which often smell of rotten eggs, can also harm humans as they contain cynanobacteria, which can produce skin rashes  and other allergic reactions as well as poisons that damage the liver. Doctors warn that drinking water contaminated with the algae can cause severe diarrhea.

The current algae explosion in the Baltic is the largest since 2005 and has been encouraged by daytime temperatures of up to 38C, light winds and an absence of waves, which normally help to break up weed carpet.

Scientists say one of the main causes of blue-green algae is over-fertilization of farmland, leading to large quantities of phosphorous and nitrogen being washed off the land and into the Baltic from rivers. They say that under the right climatic conditions a weed explosion is inevitable. "Over-Fertilization is the biggest environmental problem facing the Baltic; it is the driving force behind the spread of dead zones on the sea bed," Mr Lamp said.

The WWF has criticized countries with a Baltic coastline for agreeing on ambitious targets for reducing over-fertilization while also encouraging farmers to use more fertilizers.

In Germany, where several Baltic beaches were closed in 2001 because of algae, coastguards have already warned bathers not to going swimming if the sea water is contaminated.