Posted by ep-admin on Saturday, 25 December 2010 in Wildlife Conservation

Finding a Solution for Amur Tigers 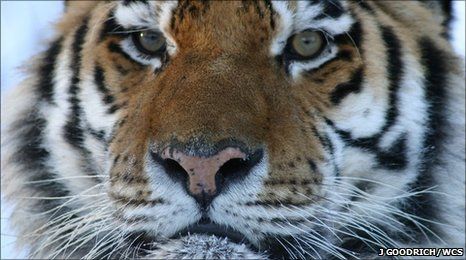 Living within the habitat of a dangerous animal is not easy.

But it is particularly challenging when that animal is the critically endangered Amur tiger.

If a tiger wanders into a remote Russian village it poses a threat, but also raises a difficult quandary: how can people protect themselves without resorting to killing a creature that is on very the brink of extinction?

A special Tiger Response Team in Russia has sought to solve that problem.

The World Conservation Society (WCS) and an anti-poaching patrol dubbed Inspection Tiger are working closely with the team.

It was set up by the government in 1999 to help resolve "human- tiger conflict".

Amur tigers live in the mosaic of forests in Russia's Far East - an expanse of more than 150,000 sq km of tiger habitat that is dotted with small human settlements.

"There's a grey area where both tigers and humans co-exist," explains Dale Miquelle, director of the WCS Russia Programme.

"So, even though the tigers are incredibly scarce, they do pass through or close to villages on a regular basis."

When a tiger does come too close, it might prey on a domestic animal - most commonly a pet dog or a cow.

In the past 10 years, Amur tigers have killed at least 254 domestic animals, 160 of which were dogs.

And this is where the response team's very hands-on approach comes in.

When someone sees a tiger or discovers an animal that has clearly been mauled by one, they can alert the local authorities, who then contact the team.

"The local authorities assess the situation and, if necessary, a team is despatched," explained Dr Miquelle.

"But we're dealing with a vast area, so it can take several days to reach the village."

Once there, the response team has a number of options.

The most straightforward is to scare the tiger away, using rockets or flares. But sometimes it is necessary to capture the animal.

"We do that quite often," says Dr Miquelle. "What we do once we capture it depends on the situation.

"Sometimes we'll put a radio collar on it and put it back where it is.

"Sometimes we'll move it to another location - if we think that will reduce the likelihood of it [returning to the village]."

But if a tiger is wounded, the situation is more complicated. 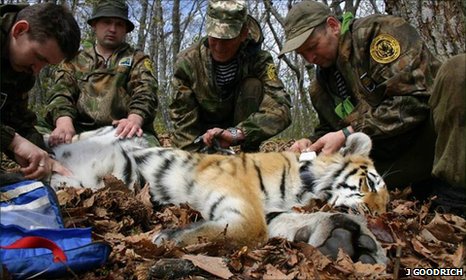 John Goodrich, a conservationist and wildlife photographer, has worked with the team during some of their tiger rescue missions.

He says most tigers that attack people in Russia have been shot by poachers or injured by traps.

And these injuries change the tigers' behaviour - driving the animals into human populations to pick on domesticated prey, if they are incapacitated and unable to hunt.

According to Dr Goodrich, wounds from from botched poaching attempts are a leading cause of Amur tiger attacks on people.

Injured tigers can sometimes be rehabilitated and released into the forest.

But when one is too badly hurt or too dangerous, the team has to remove it from the wild altogether - for its own safety, as well as to protect humans.

Dr Goodrich followed the rehabilitation of one young male tiger called Volya, which was shot in the face by poachers.

"The bullet broke three canines and shattered his lower jaw," he recalled.

Vets at the Utyos Wildlife Rehabilitation Center wired it together as best they could: "But the injury condemned Volya to a life in captivity".

Dr Goodrich and his colleagues are now attempting to survey the prevalence of infectious diseases in the Amur tiger population, which might also affect their behaviour and make them more aggressive to humans.

It is tricky to quantify exactly how many tigers the team's efforts have saved; but at this stage, every individual counts.

The latest survey estimated that there were just 350 Amur tigers remaining in the wild.

"There's some indication that we've been able to reduce the number of tiger losses associated with conflicts," said Dr Miquelle.

He says there is definitely room for improvement. Efforts to scare animals away from human-dominated areas have not been as successful as hoped.

"But with so few tigers remaining, we know we have to turn that declining trend around," he tells BBC News.

"And we do see human caused mortality as a really important component of that - 20 years ago, the main intervention was a bullet."

In such isolated communities, the response team hopes to give local people a signal that there is a group that cares about their welfare.

"It really can be extremely threatening when an animal the size of a tiger walks into you neighbourhood," says Dr Miquelle.

"So having a team that can deal with that is really important."