Posted by earthprotect on Sunday, 11 July 2010 in Oil Spill

Robotic submarines working a mile underwater removed a leaking cap from the gushing Gulf oil well Saturday, starting a painful trade-off: Millions more gallons of crude will flow freely into the sea for at least two days until a new seal can be mounted to capture all of it.
There's no guarantee for such a delicate operation deep below the water's surface, officials said, and the permanent fix of plugging the well from the bottom remains slated for mid-August. 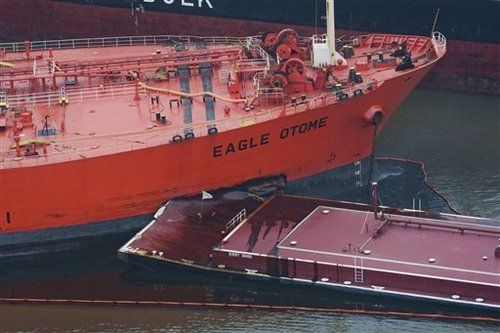 "It's not just going to be, you put the cap on, it's done. It's not like putting a cap on a tube of toothpaste," Coast Guard spokesman Capt. James McPherson said.
Robotic submarines removed the cap that had been placed on top of the leak in early June to collect the oil and send it to surface ships for collection or burning. BP aims to have the new, tighter cap in place as early as Monday and said that, as of Saturday night, the work was going according to plan.
If tests show it can withstand the pressure of the oil and is working, the Gulf region could get its most significant piece of good news since the April 20 explosion on the BP-leased Deepwater Horizon rig, which killed 11 workers.
"Over the next four to seven days, depending on how things go, we should get that sealing cap on. That's our plan," said Kent Wells, a BP senior vice president, of the round-the-clock operation.
It would be only a temporary solution to the catastrophe that the federal government estimates has poured between 87 million and 172 million gallons of oil into the Gulf as of Saturday. Hope for permanently plugging the leak lies with two relief wells, the first of which should be finished by mid-August.
With the cap removed Saturday at 12:37 p.m. CDT, oil flowed freely into the water, collected only by the Q4000 surface vessel, with a capacity of about 378,000 gallons. That vessel should be joined Sunday by the Helix Producer, which has more than double the Q4000's capacity.
But the lag could be long enough for as much as 5 million gallons to gush into already fouled waters. Officials said a fleet of large skimmers was scraping oil from the surface above the well site.
The process begun Saturday has two major phases: removing equipment currently on top of the leak and installing new gear designed to fully contain the flow of oil.
BP began trying Saturday afternoon to remove the bolted top flange that only partially completed the seal with the old cap. Video images showed robotic arms working to unscrew its bolts. Wells said that could last into Monday depending on whether the flange can be pulled off from above, as BP hopes. If not, a specially designed tool will be used to pry apart the top and bottom flanges.
Once the top flange is removed, BP has to bind together two sections of drill pipe that are in the gushing well head. Then a 12-foot-long piece of equipment called a flange transition spool will be lowered and bolted over it.
The second piece of pipe inside the well head came as something of a surprise, and raises the possibility that one of the sections of pipe became jammed in the Deepwater Horizon's blowout preventer, though which the well pipes run. The failure of the blowout preventer, a massive piece of equipment designed to stop the unchecked flow of oil, is partly to blame for the size of the spill.
"That will be an important question to ask when we pull the blowout preventer up to the surface and we'll figure out where that pipe ultimately landed," Wells said.
After the flange transition spool is bolted in place, the new cap - called a capping stack or "Top Hat 10" - can be lowered. The equipment, weighing some 150,000 pounds, is designed to fully seal the leak and provide connections for new vessels on the surface to collect oil. The cap has valves that can restrict the flow of oil and shut it in, if it can withstand the enormous pressure.
That will be one of the key items for officials to monitor, said Paul Bommer, a professor of petroleum engineering at the University of Texas at Austin.
"If the new cap does work and they shut the well in, it is possible that part of the well could rupture if the pressure inside builds to an unacceptable value," Bommer wrote in an e-mail Saturday.
Ultimately, BP wants to have four vessels collecting oil within two or three weeks of the new cap's installation. If the new cap doesn't work, BP is ready to place a backup similar the old one on top of the leak.
The government estimates 1.5 million to 2.5 million gallons of oil a day are spewing from the well, and the previous cap collected about 1 million gallons of that. With the new cap and the new containment vessel, the system will be capable of capturing 2.5 million to 3.4 million gallons - essentially all the leaking oil, officials said.