Is Organic Food the Answer?

Well, that depends on the question.

Of all the things I write about – energy, the greening of business, the politics and policy of climate change, geoengineering – food is by far the most emotional. With near-religious fervor, people debate the merits or demerits of, broadly speaking, two ways to produce food. 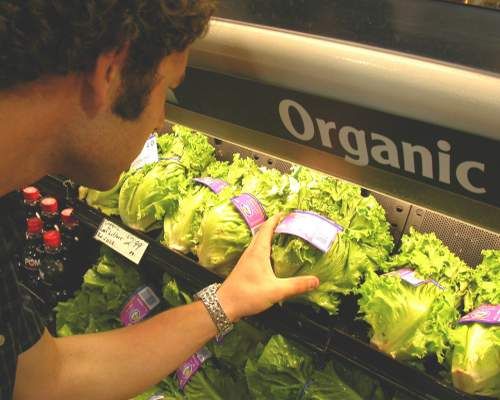 The first can be described, depending upon who’s talking, as big, fast, modern, conventional, industrial, intensive, chemical, genetically-modified, processed and global. It’s the system that delivers most of the food that most Americans eat.

The second is described as organic, sustainable, local, small-scale, family-owned, natural, agro-ecological and slow. It’s driving the growth of farmer’s markets and community-supported agriculture, as well as Whole Foods, and it’s increasingly being taken seriously by big companies like Walmart, Safeway and Kroger’s.

As shoppers and as eaters, most of us partake from both worlds. But make no mistake about it- the advocates of conventional food and those pushing reform are deeply polarized, as I’ve seen first-hand lately.

Earlier this month, I moderated a conference for CropLife America, a trade association of companies that make herbicides and pesticides. [Disclosure: They paid me to do so.] To their credit, the folks at CropLife – corporate members include Bayer CropScience, DuPont, Monsanto and Syngenta – brought in critics like Robby Kenner, director of the movie Food Inc., and Greg Jaffe of Center for Science in the Public Interest.  The CropLife people and their allies say they have nothing against organic or alternative food systems, but they don’t believe that organic ag can match modern agriculture (their term of choice) in terms of efficiency or yield. A reliable food supply on a large scale and at reasonable cost can only be guaranteed with the help of crop protection products, they say. Steve Savage, an industry consultant and blogger, made this argument articulately at the CropLife event; he’s skeptical about the claims being made for organic ag, to say the least. See, for example, Organic Crops Alone Can’t Feed the World, from Slate, or The Seven Most Dangerous Myths About Organic Farming.

Maria Rodale, left, and Myra Goodman, talking with Corby Kummer of The Atlantic

Last week, at the Monterey Bay Aquarium’s Cooking for Solutions powwow, organic advocates were out in full force, particularly at a scrumptious all-organic breakfast at Earthbound Farm, America’s largest brand of organic produce. There we heard from Earthbound co-founder Myra Goodman, a passionate advocate for organic, and from Maria Rodale, chairman of Rodale Inc and author of Organic Manifesto: How Organic Food Can Heal Our Planet, Feed the World and Keep Us Safe. Her subtitle sums up the claims made on behalf of organics very well and in the book she goes a step farther, writing: “Organic agriculture is the key to our survival.”

Frankly, I’m confused about much of this. I’m skeptical in particular of the claim that organic agriculture is as productive or more productive than farming methods that use synthetic chemicals and genetically-modified foods. Partly that’s because most farmers have embraced modern ag. Less than 1% of US farmland is farmed organically. If farmers could improve their yields by giving up chemicals and genetically modified seeds, why wouldn’t they?

I put that question to organic advocates in Monterey including the fine farm and food journalist Tom Philpott and author-activist Anna Lappe, as well as Maria Rodale, and got some interesting answers. They identified strong cultural and institutional obstacles to organic.

Big seed companies, they said, dominate the market and push farmers towards GM crops. Agriculture schools and crop consultants who advice farmers are financed by and tilt toward chemical methods. Even the 4-H and Future Farmers of America are funded by the chemical companies.

Crop insurance can be more expensive for organic growers. Organic farming is more knowledge-intensive. And because farmers, like the rest of us, are influenced by their peers, they have a reluctance to go against the grain. I was told that there’s even a stigma attached to organic fields, where different crops are planted side by side and flowers grow to attract beneficial insects, because they look messier than mono cropped land.

Maria Rodale, who interviewed lots of conventional farmers for her book, told me that a farmer told her: “If I went to my banker and told him I was going to go organic, they’d laugh me out of the bank.”

What’s more, converting farmland from chemical to organic requires a three-year transition before crops can be sold as USDA-certified organic. “That’s the biggest risk for farmers,” Rodale said. “It’s a three year transition, and they can’t collect the organic premium.” What’s more, some of the benefits of organic growing – soil that becomes enriched over time, for example – require taking a long term view.

All this complicated the picture for me, although it remains hard for me to believe that the overwhelming majority of American farmers would act in ways contrary to their own self interest.

Myra and Drew Goodman, the founders and owners of Earthbound Farm, clarified matters a little when they explained that organic farmers have higher costs, perhaps just a few percent higher for the very popular salad mixes they sell but up to 30 or 40 percent higher for row crops like broccoli, strawberries, romaine heads, etc. So farmers who choose the organic path are taking a risk because there may not be enough people willing to pay a premium for the products they sell.

Said Myra: “It’s much more expensive (for us) to farm organically, and we are the most efficient producer out there.” Small organic farmers face even tougher hurdles, and they might do better to serve farmer’s markets or nearby restaurants, Drew said.

But if the economic benefits to farmers are uncertain — and it seems to me that they are either uncertain or long term — the case for the health and environmental benefits of organic seems stronger. Logic argues that chemicals created to kill weeds or pests can’t be good for farm workers who are repeatedly exposed to them. Soils treated repeatedly with chemicals lose their ability to sequester carbon, the organic advocates say. Chemical fertilizers applied to soils in the Midwest contribute to vast dead zones in the Mississippi.

And, while the scientific evidence, if any, for the health benefits of organic or the risks posed by chemical residues on food is a matter of great debate, it strikes me as entirely possible (albeit unproven) that chemical pesticides could do some of us some harm.

Maria Rodale goes a lot farther than that.

“Autism, ADHD, diabetes, obesity, cancer, Parkinson’s Disease,” she said. “I don’t think we realize yet that how our food is grown is contributing to these diseases.”

What are we to make of all this? All I can say is that we need more third-party unbiased science to address the competing claims. (Maybe The Sustainability Consortium can help sort some of this out.) The productivity and environmental issues should be relatively easy to settle; untangling the claims about health will be much harder. Some people I respect – notably plant scientist Pamela Ronald and her husband, organic farmer Raoul Adamchak – argue that truly sustainable farming should be able to embrace both organic and genetically engineered crops. (See my 2010 blogpost, Biotech and Organic Food: A Love Story.)

I’m going to keep buying organic food, especially fruits, vegetables and milk. I’m fortunate enough to be able to pay the premium, and even if some of the claims for organic ag are overblown, others (especially around farm workers’ health) make sense. I’m also going to keep listening with an open mind, and keep reading–beginning with Maria’s book. Suggestions for other reading are most welcome.