On Tuesday, the decomposed body of a juvenile sperm whale was found 77 miles from the well, according to the National Oceanic and Atmospheric Administration. Investigators are trying to determine whether oil played a role in its death; it was not found in oiled water. 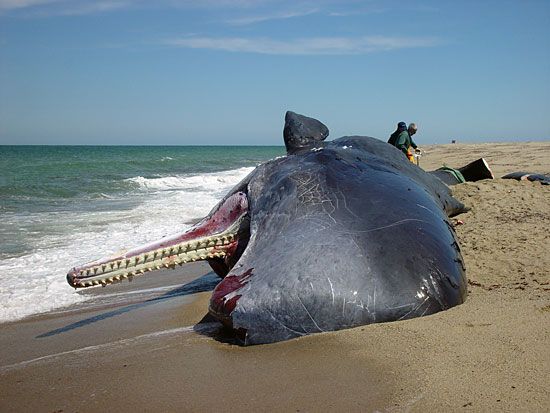 Routinely holding their breath for about 45 minutes, sperm whales can dive half a mile to hunt fish and squid. When they arrive at the surface, they spend about nine minutes breathing and preparing for their next dive.

A recent review of whalers' logbooks shows that from 1788 to 1877, about 204 voyages spent at least one season whaling in the Gulf. Recent research indicates about 40 whales at any one time live around the Mississippi Canyon, and females and immature whales prefer this area.

BP's undersea well gushing out oil is in this canyon.

The aftermath of the 1989 Exxon Valdez oil spill offers a glimpse into what might be in store for the sperm whales of the Gulf. Many North Pacific killer whales died throughout the year after that 11 million gallon spill. Forty percent of the whales in the most exposed groups died, including all of the breeding females in one group. As more long-term studies emerge, we see that after 20 years, the killer whales still have not fully recovered.

Risk factors for the sperm whales of the Gulf are similar to those for the killer whales of coastal Alaska: They are swimming in oil; females and juveniles depend on critical habitat near the spill, and the population is already small and isolated.

Oil can damage and kill marine mammals in myriad ways.

The major threat to sperm whales is probably breathing in volatile organic compounds at the surface. The residents of New Orleans, Louisiana, may smell a bad odor from the spill, but imagine, after a 45-minute dive, surfacing into a noxious cloud of contaminated air. Breathing these fumes can lead to pneumonia, damage to the brain, liver and other organs; unconsciousness and death. And the dispersants added to the oil are actually more volatile than crude.

Oil could also contaminate or kill the fish and squid that sperm whales eat. These creatures are highly sensitive to toxic compounds in oil. As the oil spreads, it will create a greater risk.

In the early 1990s, the U.S. Marine Mammal Commission warned about oil and gas exploration in the Gulf. Considering the risk of a large oil spill to marine mammals, the commission said "such effects might result in the complete loss of a regional population and require three or more generations to recover."

BP and its federal regulators ignored these warnings. But they were far from alone.

Every single person in the United States who uses oil has a personal connection to this spill. As I watch footage of the oil flowing into this deepwater habitat, I realize that I am partially responsible. If Americans didn't use as much oil as we do, we wouldn't have to drill as much -- or at all.

It's too soon to say what will become of the sperm whale in the Gulf of Mexico. But it is fair to say a new energy source won't suddenly emerge to replace petroleum.

So, what can we do? We can support clean energy in every way possible, but we also must decrease our oil consumption. Maybe we will all be able to learn something from this disaster and adapt.