Posted by ep-admin on Tuesday, 02 November 2010 in Sustainable Development

Students and Campuses Leading the Way in Sustainability

cross-Posted from The Point News, the campus paper of St. Mary’s College of Maryland

While the United States Congress has yet to pass comprehensive climate change legislation and the United Nations Framework Convention on Climate Change seems to like negotiating more than creating legally binding treaties, students have been very successful at tackling climate change on campus.  Two weeks ago in Kansas City, Missouri, I gave a presentation at the National Collegiate Honors Conference with fellow SMCM students Rachel Waldron and Jimmy Ferioli titled “Cross Currents of Environmentalism: Academics and Activism” that reminded me that colleges and universities really are being forces for change, cutting carbon, and helping to build the clean energy economy. 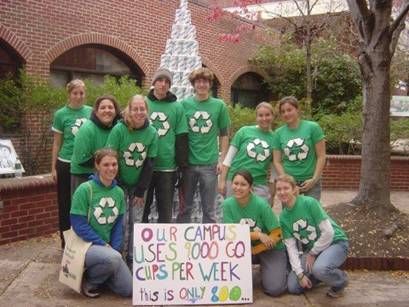 The American College and University Presidents Climate Commitment, which commits institutions to becoming carbon neutral, has 675 signatories to date (including St. Mary’s College of Maryland).  This agreement must be signed by the chancellor or president and is a very clear sign that climate change is no longer a fringe issue that only a fraction of students care about.  It’s an issue that is of enough concern to warrant institutional recognition and action.  Even if colleges aren’t signatories to the PCC, chances are that they are trying to get favorable scores on the Princeton Review’s Green Rating System, the Association for the Advancement of Sustainability in Higher Education’s Sustainability Tracking, Assessment and Rating System (STARS), or the College Sustainability Report Card.  These ranking systems give positive recognition for schools that have organic farms on campus, purchase renewable energy, composting, and promote eco friendly habits such as walking, biking, and using public transit.  While this might not see substantial, according to a survey done by Princeton Review, 68 percent of prospective students prefer colleges or universities that have a commitment to sustainability.  All in all, it’s clear that change is coming to the American university.

So as we watch the election results come in and we get overwhelmed with all that we are responsible for as young people (writing SMPs, finding jobs, paying student loans and getting Congress to pass a climate change bill to name just a few), it is well worth remembering that we have changed things on campus.  It was students who got the college to commit to purchasing 100 percent renewable electricity and created the Green St. Mary’s Revolving Loan Fund.  Students were also responsible for bringing fair trade, organic Equal Exchange coffee to campus and starting the Campus Community Farm.  And it’s students who are taking environmental studies courses and continually thinking of ways to lower their carbon footprint, whether that means driving less frequently, eating less meat, or turning down the heat a few degrees and putting on a sweater.  Congress can get away with being ineffective because it’s not their future on the line, it’s ours and we’re stepping up to the challenge of transition off of dirty fossil fuels and toward a just, clean energy economic future.  So it’s about time that Congress followed our lead and got to work on getting a climate change bill passed.