Posted by plantitfilm on Saturday, 19 June 2010 in Wildlife Conservation 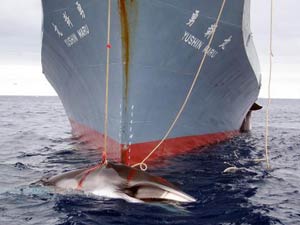 On the eve of an international meeting to decide the fate of thousands of whales, New Zealand's foreign minister is warning  that the International Whaling Commission (IWC) is facing total collapse.

Murray McCully told TVNZ's Q and A programme that could result in anarchy on the high seas and open slather on whales. "Essentially we could end up with anarchy, in terms of the whaling activity on the open sea, there'll no real effective constraint if the IWC ceases to exist or...ceases to be fully representative," says McCully.

McCully believes the IWC, which controls restrictions on whaling, is on the verge of collapse and if it goes so will any restrictions protecting the numbers which can be killed.
"The odds have always been massively on the side of breakdown rather than breakthrough and from the reports I've been getting it's not getting any better," he says.

Greenpeace says that would lead to a vacuum leaving whales more vulnerable.
"You would have no international agreement about who could whale, how much they could whale, what whales should be protected," says Bunny McDiarmid from Greenpeace.

Delegates from 88 countries are arriving in Morocco to hammer out a compromise which would allow commercial whaling for the first time in 25 years in exchange for a controlled cull. The idea is that by effectively sanctioning some deaths it will prevent more. The deal would save around 3,000 whales over 10 years but New Zealand says it is a step back.

But some campaigners don't believe the IWC's demise would be all bad.
"I think the IWC is dysfunctional so I don't have any faith in the IWC protecting whales and dolphins, we need a whole new system, and maybe that's what's going to come out of this actually," says marine mammal specialist Richard O'Barry.

Japan is again threatening to pull out of the commission and with demand for whale meat growing there, it may not have enough incentive to reduce its slice of the catch.

EU Law Says the EU Countries Must Vote to Protect Whales and Uphold the IWC Ban on Commercial Whaling
On Friday the 11th June, Environmental Ministers of EU-Member States meet to discuss whether they can finally reach a common position over a highly controversial proposal by the Chair of the International Whaling Commission (IWC) which will be discussed and decided upon at the annual IWC Meeting that takes place between the 21st and 25th of June in Agadir, Morocco. The IWC Chairman's proposal could have the effect of legitimising commercial whaling for a ten-year period as well as allowing whaling in the Antarctic whale sanctuary.

WDCS, the Whale and Dolphin Conservation Society, and ClientEarth, an expert organisation of activist lawyers, today remind Member States of the European Union that EU law requires them to reject all attempts to see a resumption of commercial whaling. The two groups make this call in response to the ongoing attempts by Denmark and Sweden to force the EU to either support the proposal or abstain on any vote as an EU block at the forthcoming IWC meeting.

If the EU Member States are asked to abstain, this could pave the way for the adoption of the IWC Chairman's proposal.

The analyses provided by WDCS and ClientEarth demonstrates that, should the IWC Chairman's Proposed Consensus Decision ("the deal") be accepted, there is a significant risk of EU Member States' national laws coming into conflict with EU law on the protection of whales.

Chris Butler-Stroud, CEO of WDCS, reminds governments that 'The people of Europe will accept nothing less of their Governments but that they will fight for the continuation of the current ban on commercial whaling.' He continues 'No EU country should even be contemplating accepting proposals that would see any endorsement of commercial whaling - it's not only ethically unacceptable, it's now clear to countries that its also legally incompatible with European law and we are currently looking into all legal options to defend the EU's high standards of protection for whales.