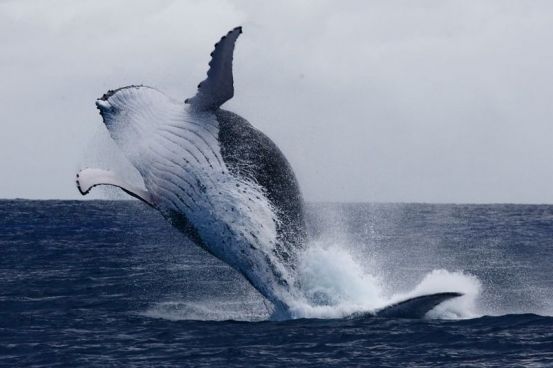 Humpback whales hold the record for the longest migrations in the mammalian world. Now, researchers have found that the paths they follow on those migrations are astonishingly precise - an observation that raises more questions than answers about how they navigate on their lengthy treks.

Writing in the journal Biology Letters, a team of researchers led by Travis Horton of the University of Canterbury in New Zealand describe attaching satellite tags to 16 humpback whales migrating from breeding grounds off Brazil, New Caledonia, and the Cook Islands to cold-water feeding grounds. The researchers found that the whales were remarkably accurate when it came to finding their desired destination: the three whales that were tracked to high-latitude feeding grounds in the Antarctic ended their migrations within approximately 100 km of the same spot, despite migrating in different months of different years along different migration routes.

Just as remarkable, the paths that they swam were straight as arrows: Horton and colleagues discovered that each whale would swim for hundreds, even thousands of kilometers at a time along a straight line, never deviating more than 1 degree even when strong cross-currents might have been expected to push them far off course.

"It's just absolutely remarkable how straight these courses are," Horton told National Public Radio. "They're doing something rather precise. They're actively and deliberately navigating within some sort of external reference frame."

The question inevitably arises as to what that external reference frame could be.

One possibility was that the whales somehow plot their routes using Earth's magnetic field; but the paths taken by the whales from their different starting points were so different, and the variation in the field along those paths so great, that the scientists could discern no obvious correlation. Similarly, although it was possible they might be orienting themselves using the sun, the rapidity with which the sun changes position in the sky, and the obvious difficulties in using it as a primary marker during lengthy voyages that take place at least partly underwater, render that unlikely as well.

"It seems unlikely that individual magnetic and solar orientation cues can, in isolation, explain the extreme navigational precision achieved by humpback whales," the researchers summarized.

Perhaps, speculates Horton, the whales are somehow using the two together. Perhaps, he adds, they are also making use of the moon and stars.

Another researcher, John Calamobodikis of the Cascadia Research Collective, has suggested that humpbacks may be able to monitor each other's long-range vocalizations as a means of following other whales' progress and thus staying on course.

For now, however, the method behind humpbacks' navigational precision remains a mystery.

Photographs of breaching humpback (top) and of humpback being fitted with satellite transmitter (bottom) by Paul Hilton.