Posted by ep-admin on Wednesday, 11 August 2010 in Air Quality

Is Russia One Deadly Heat Wave Away From Climate Protection? 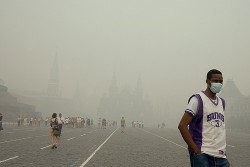 "Practically everything is burning."

That's what Russian President Dmitri Medvedev had to say about the results of a massive heat wave that has already left more than 1,000 dead and, according to some estimates, is now killing 700 a day.

It took this toll to finally make climate change hit home for Medvedev. During the climate negotiations in Copenhagen last year, he had been one of the highest-profile global warming skeptics. Now he is singing a different tune.

His exact words are important to note. Medvedev said, "What's happening with the planet's climate right now needs to be a wake-up call to all of us, meaning all heads of state, all heads of social organizations, in order to take a more energetic approach to countering the global changes to the climate."

From other world leaders, this sort of statement might seem mundane. But from a president whose official line has been that Russia will continue to develop and increase its carbon emissions, and in a country that ranks third behind China and the U.S. for emissions already, it could be a game-changer.