Posted by plantitfilm on Sunday, 08 March 2009 in Mining

(Compiled by Mara Bacsujlaky for the Bristol Bay Alliance) 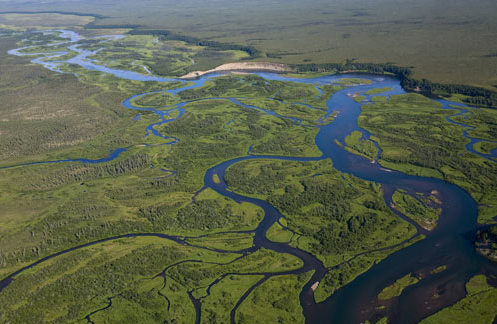 The mines that are featured here are all mining operations whose main components were developed within the last 30 years, using “state-of-the-art”, modern hardrock mining technology. A few are located at places where previous mining had occurred (Summitville, Baia Mare, Molycorp).

Unfortunately, the leakages and dam failures that caused both short and long term damage to aquatic resources are not examples of isolated, unusual accidents, but are common characteristics of hardrock mines with large tailings impoundments and dams. These accidents and/or chronic leaks differ only in level of severity and duration of impact to aquatic resources, and in some cases, public health. In all cases, contaminants from the hardrock mining process were the cause of pollution; additionally, in all examples cited here, the operations were subject to extensive engineering design and environmental review processes conducted by governmental bodies – both local and federal. Water pollution occurred both to ground and surface waters – and involved releases of either cyanide, heavy metals and acid generated from mine waste.

Summary
Located in Romania, in Eastern Europe, Baia Mare was a recovery operation intended to mitigate chronic pollution problems from previous mining activity, while at the same time, its operator, Aurul, recovered precious metals still remaining in the mine waste. Aurul was a joint venture company formed by Australian and Romanian mining interests. The Baia Mare tailings dam was designed to be the most modern in the region, with the dam fully lined so there would be zero discharge of mine waste to the environment.

Environmental and Public Health Impacts
On January 30, 2000, as a result of snow and rain, water in the tailings impoundment overtopped the dam, resulting in a break in the dam. One hundred and thirty cubic yards of mine waste containing approximately 75 tons of cyanide flowed into the Sasar River, and then into the Somes. The Somes is a branch of the Tisza river, the second largest river in Hungary. All of these rivers are part of the larger Danube River system.

In all, over 1,200 miles of the Danube River system were contaminated. The spill threatened the drinking water supplies of 2.5 million people and caused enormous damage to wildlife in Hungary and Yugoslavia. It was estimated that 80% of all fish in the Tisza River died as a result of the spill.

As CNN reported on February 14, 2000, “dozens of volunteers, fishermen and locals, wearing protective rubber gloves, removed hundreds of dead fish from the Tisza so that they could be buried. ‘Everything's dead, cyanide destroyed the entire food chain,’ said fisherman Slobodan Krkjes, 43, in a broken voice. ‘Fishing was my job. I don't know what I'm going to do now.’” 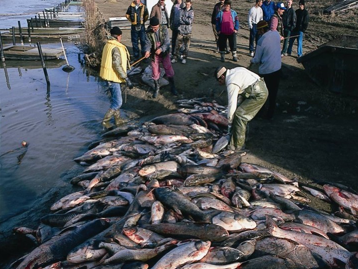 Long-term Effects
Cyanide quickly breaks down in natural systems, so its impacts are very short term ( i.e. acute). Although the cyanide spill from Baia Mare killed nearly all of the fish in the Tisza River system, toxicity of the cyanide plume quickly diminished in the days following the spill. On the other hand, the heavy metals contained in the waste did not cause immediate harm to aquatic resources, but because they do not move out of an aquatic system, and some may bio-accumulate, these are more likely to cause long-term (chronic) effects to fish and wildlife.

The rivers that were impacted by the Baia Mare dam failure already contained elevated levels of heavy metals as a result of a lengthy history of mining activity in the region. In the years since the spill, the Tisza River recovered faster than expected, but its upper reaches remain severely impacted. Additionally commercial fishermen found they couldn’t sell their fish because despite expert assessments that Tisza fish are now safe to eat, the negative publicity from the contamination remains.

Tisza fish used to be famous in Hungary for their fresh taste – but in the months after the spill, demand for Tisza fish dropped to less than 20% nationwide. Although the market has recovered since, the adverse publicity from the spill still has a lingering effect on the Tisza fishing industry.

Summary
Located in south central Colorado, the Summitville Gold Mine was an open pit heap leach gold mine that used cyanide to extract gold from the ore. The mine operated from July 1986 through October 1991 – when it was abandoned and its operator, Summitville Consolidated Mining Corp. Inc. declared bankruptcy. Since then the US Environmental Protection Agency and the State of Colorado have spent over $170 million cleaning up and stabilizing the mine site. Legal attempts by the United States government to hold the mine operators accountable and fiscally responsible for cleaning up the pollution and reclaiming the mine site failed.

Environmental and Public Health Impacts:
The Alamosa River downstream of the Summitville Mine is used extensively for livestock watering and agricultural irrigation. Principle crops include wheat, barley, alfalfa and potatoes. Wetlands associated with the Alamosa are important habitat for migratory waterfowl and the endangered whooping crane.

As of 2001, 10 years after the mine ceased operations, 17 miles of the river downstream of the mine still supported no aquatic life. Contamination of ground and surface waters down-gradient of the mine began shortly after open pit mining started. Cyanide-laden solution leaked into groundwater below the heap leach pad and on several occasions leaked from transfer pipes directly into Wightman Fork, a tributary of the Alamosa. Additionally, acidic, metal bearing drainage seeped from numerous sources around the mine site, including a mine waste dump.

The metals that contaminated the Alamosa included copper, cadmium, zinc, lead and aluminum. The ph of the mine acid discharge was about 3 (rivers are generally a neutral 7). The acid and the metals came from the decomposition of sulfide-bearing minerals in the ore and waste rock mined at Summitville. These include chalcopyrite and pyrite, which are found in abundance at Pebble. In 1990, all stocked fish in the Terrance Reservoir and in farm holding ponds along the Alamosa River disappeared. Acid and metal contamination from the mine site is assumed to have been the cause.

Current estimates for clean-up and reclamation of the mine are about $15 million. Since the company had posted an insufficient bond of $6 million, the burden of paying for the remainder will likely fall on taxpayers.