Posted by plantitfilm on Monday, 10 August 2009 in Animals 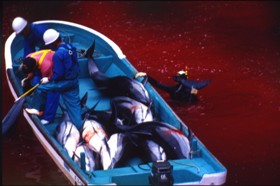 Taiji is a small fishing village located on the southern part of the Japanese archipelago at the tip of the peninsula that extends into the Pacific Ocean.

This is where the practice of driving dolphins into shallow water and slaughtering them began.  Sanctioned by the Japanese government, thousands of dolphins and others small whales are killed every year.

Some are killed with hand-held harpoons out at sea; others are killed in the so-called drive fisheries. Most are butchered and processed into meat for human consumption. According to our Japanese sources, some dolphin meat is used as pet food and fertilizer. With one of the most beautiful coastlines in the world, Taiji is a lovely place.  The majority of people here are exceptionally honest and friendly, and it looks like time stopped here in the 1950s.There is no crime to speak of in this remote fishing village, except for these crimes against nature that only involve a handful of people. Not everyone here is involved in the dolphin slaughter. In fact, most people in Japan don't even know about it. If they did, they might help put an end to this madness.  The Taiji dolphin hunters have developed a highly efficient method of capturing and killing dolphins. This is how it works: A small group of dolphin hunters usually operate with 13 motorized boats about 40 ft. long. Two men are assigned to each boat. At sunrise, the boats go out in a single file searching for dolphins. Each boat carries two 15 foot long metal poles, one on each side. When the dolphin hunters locate a pod of dolphins, they position their boats in a long row, evenly spaced. They then lower their metal poles into the water and start banging on them with hammers. It's a hideous sound that never goes away once you hear it. The noise literally creates a wall of sound underwater and is used to gain control over the dolphins. The underwater noise functions as an acoustic barrier between the dolphins and the open sea. The dolphins run for their lives to get away from the terrifying noise, but this only brings them closer and closer to shore. The loud noise causes the dolphins to panic. They herd together for safety, and their fear and loss of navigational sense enable the dolphin hunters to drive them into a killing cove.

Once inside the cove, the whalers drop two nets into place at the entrance, sealing the dolphins’ fate. With the animals trapped in a small area, it is an easy task for them to force the dolphins into shallow water and drive hooks, sharp spears and knives into their bodies. The water turns red with blood, and the dolphins emit high-pitched whistles and cries of pain. But there is no escape from this nightmare.

This small group of Taiji dolphin hunters say that the dolphin hunt is something they are proud of. They say it is part of their culture, their tradition. Some people have the misconception that whenever something can be labeled "traditional or "cultural," it automatically justifies its continued existence. But it doesn't. The bloody sport of bullfighting, for example, is considered "traditional" in some countries. Not allowing women to vote has been traditional in some countries. Does that make it right? Of course not.  When the dolphin massacre is over, the bodies are hauled away to the local slaughterhouse for processing. For years, we have traveled to Taiji to photograph the butchering process in order to get the horrific truth out to the Japanese people who have a right to know about it. But we are constantly blocked by the dolphin hunters. They simply don't want the world to know about their little dirty little secret, and a big part of their job consists of hiding their activities. They have erected a roof of blue tarp over the killing cove to prevent us from documenting the massacres. They hide the dead bodies under large pieces of plastic and butcher the dolphins in a slaughterhouse that is completely covered up. We go out of our way to work within the framework of the law during the photographic documentation process, but sometimes things get heated and the potential for violence is high, especially during the actual killing and butchering.

There is another aspect of the dolphin hunt that is being kept very quiet: Mercury poisoning. Our Save Japan Dolphins Coalition has been buying dolphin meat from local supermarkets and tested it. The results show that the average level of mercury is far beyond the maximum allowable level - some of the meat was more than 35 times above the safe level. For this very reason the Wakayama Prefecture-based supermarket chain, Okuwa, pulled all of dolphin meat from their shelves in late December, 2007. Several other stores and markets have followed suit.

Article 21 of the Japanese Constitution states: 1) "I proclaim the rights given to me under Article 21 of the Japanese Constitution. Assembly and association as well as speech, press and all other forms of expression are guaranteed. 2) No censorship shall be maintained, nor shall the secrecy of any means of communication be violated." Yet, the Japanese government and media continue to violate article 21 by keeping the annual dolphin slaughter a secret. How can the Japanese public make an intelligent decision in regard to consuming mercury tainted dolphin meat if the Japanese government and media continue to maintain the censorship and keep the danger a secret?

Three Taiji town councilman tested the meat for themselves. Their findings were the same as ours; the meat was highly contaminated. One of the councilman, a very brave man, held a press conference in Tokyo to warn the public of the health hazard, but the Japanese media ignored him in spite of Article 21. This urgent information was censored by the Japanese media. The story was published in the English speaking media only. It may look as if the Japanese dolphin slaughter is all about "meat for money," but during a meeting with the hunters in 2004 we realized that it's not just about the money. When we offered to financially support Taiji whalers who are willing to stop killing dolphins and find another way of making a living, this is the answer we got: "That won’t work, because we don’t just hunt dolphins for their meat. We kill them because they eat too much fish." The translator explained: "They are saying that they and the Japanese government view the dolphin slaughter as a form of pest control."

Pest control? This is the first time the dolphin hunters have openly admitted to killing dolphins in an effort to keep the dolphin population down and, in doing so, make the ocean’s fish available to themselves. The oceans are depleted due to over-fishing and pollution, but they don’t want to hear it. From their perspective, they are simply killing the competition. What they are doing can indeed be called dolphin genocide. The slaughter of dolphins in Japan is incredibly savage and has to be stopped.