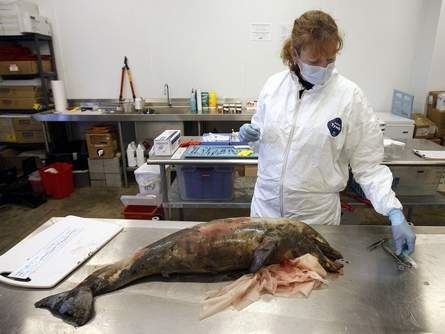 Dead dolphins have washed ashore in the hundreds along the central Gulf Coast, prompting federal officials to launch an open-ended investigation.

Since February 2010, 567 dead or distressed whales and dolphins have washed ashore in Louisiana, Mississippi, Alabama and Florida. Of those, 274 washed up in Louisiana.

The strandings peaked this year in March, with 72 reported from Florida to the Texas-Louisiana border. Sixty-seven of those were bottlenose dolphins. Since August, 52 more strandings have been reported, including nine this month.

More than 45,000 dolphins are estimated to call the Gulf home, according to the National Marine Fisheries Service.

And while many speculate that the deaths may be linked to the Gulf oil spill, scientists say the phenomenon started months before the Deepwater Horizon rig exploded and began pouring oil into the Gulf.

“We were already consulting with the mortality group (to open up an investigation) when the oil spill occurred. And the number has never gone back down,” Fougères said.

It's a mystery that has caused the Marine Mammal Health and Stranding Response Agency to declare it an “unusual mortality event” and open a federal scientific investigation.

Locally, federal investigators have been working with the Audubon Institute in New Orleans and Louisiana Wildlife and Fisheries.

When reports come in, either from the public or oil-spill cleanup crews still working along some Louisiana beaches, teams are dispatched to verify and document the stranding.

If the dolphin corpse is in good condition, it is sent to the Audubon Aquarium for study. If it's already decomposed, samples are taken in the field.

The samples are sent to labs across the country for testing, Smith added.

While disturbing, the mass strandings have happened before. The National Oceanic and Atmosphere Association began its tracking program in 1991. There have been 53 such events nationwide since then, Fougères said, many of them in the Gulf.

These die-offs are attributed to infectious disease, environmental factors or algae blooms that can be toxic. Unusually cold winters can also be a cause.

“Unfortunately, a great proportion of these have unknown causes,” Fougères said.

What's unusual about this event is the length of time it's been going on — 18 months — and the magnitude.

“Usually it's a couple of months,” Fougères said. “The fact that it's been going on this long is unusual.”

Because there's no end in sight to the marine-mammal deaths, Fougères said there's no telling when the federal investigation may wrap up.

In addition, many of the samples are tied up in the federal investigation into the oil spill, called the Natural Resources Damage Assessment, because they're considered evidence in the case against BP.

There could be multiple causes behind the die-off. Scientists will continue testing and investigating until they can release a final report, but that could take months or years, Fougères said.

“We continue with our work so that hopefully we can find an answer and help the surviving animals in the Gulf,” Smith said.

Anyone who finds a dead or distressed dolphin can report it to NOAA's hotline for stranded marine mammals at 1-877-WHALEHELP.