Posted by Angel on Saturday, 24 March 2012 in Earth Violators

Dolphins Dying in the Gulf 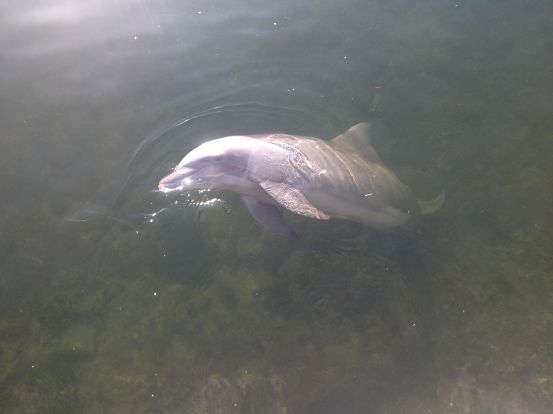 Over 675 wild dolphins have been stranded in the northern Gulf of Mexico since February 2010. Most of them were found dead, but 33 were alive and seven were taken to rehabilitation centers. The average number of dolphin strandings for the northern Gulf is 74 per year, according to NOAA. So the numbers documented since 2010 are much higher than they would be normally.

Additionally, NOAA marine mammal biologists and their local, state, federal and other research partners have found bottlenose dolphins in the Barataria Bay, Louisiana area are very ill. Their preliminary results from studying 32 live dolphins showed many of them are anemic, and underweight. Also some have low blood sugar and signs of liver and lung disease. Almost half have low levels of hormones which help stress responses, immune function and metabolism. Researchers fear some of the dolphins in the study won’t survive. One of the dolphins passed away in January of 2012.

Some areas within the northern Barataria Basin are still closed to commercial fishing due to oil contamination. Even now, there is reportedly still some oil visible along shoreline.

These very negative impacts on dolphins and the Gulf waters are being documented by NOAA and its’ research partners as part of an ongoing long-term study, following the Deepwater Horizon oil disaster.

To make matters worse, the current White House administration has proposed cutting all funding for the Marine Mammal Stranding Network. An official from one of the non-profits that works to rescue dolphins and seals said, “The cut to this grant program would be a huge hit for us. There’s just this one small parcel of money for stranding work from the federal government. We do this work fulfilling a mandate that NOAA has, and  it’s important that they support it”, said Katie Moore, manager of the International Fund for Animal Welfare. (Source: Public Radio International)